“Blonde” Coffee Rolls Out From Starbucks 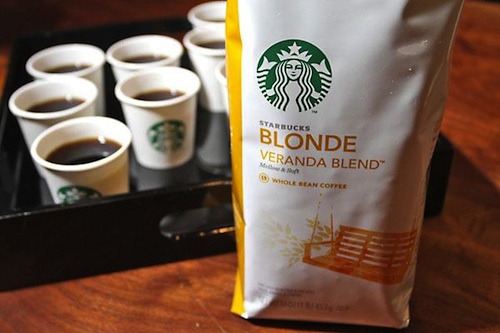 Here’s a fact we didn’t know at The Blonde and The Brunette: 40% of the 130 million coffee drinkers in the U.S. prefer a lighter-roast coffee. Drumroll. Today it was announced  Starbucks® Blonde Roast is launching in January. Apparently a blonde-roast will appeal to existing Starbucks customers, as many of their coffee drinkers have complained about their house blends being “too heavy,” as well as  non-Starbucks customers who generally prefer lighter blends. Because Starbucks’ internal research says that 42% of Americans enjoy coffee that doesn’t really taste like coffee (“a lighter roast”), they’re rolling out the Blonde. The coffee will be “light bodied and flavorful” and will be available as whole bean coffee, ground coffee, VIA or K-Cup packs. Sounds like we will be doing a taste test in one of our editorial meetings. Personally I prefer a dark roast, but I’m a Brunette. Kathryn, what’s your preference?