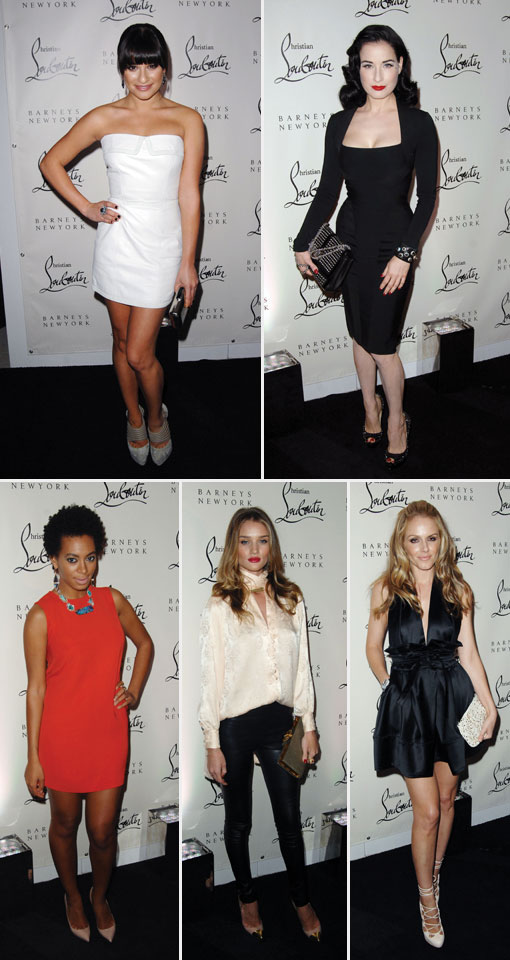 We’re starting to catch up with all the events that are happening around LA and we know so many of our readers of  The Blonde and The Brunette and Astrid are Louboutin mega-fans. So as another tip of our hat to Astrid in Wonderland followers, we made our way to Barneys in Beverly Hills as they rolled out the “Black Carpet” for The Christian Louboutin 2oth Book Anniversary signing.  It was a love fest hosted by Rosie Huntington-Whiteley, Lucy Liu, Monet Mazur, Cameron Silver and Dita Von Teese with Lea Michele from Glee and Perry Reeves from Entourage fame (who both couldn’t be nicer) and most of the town also in attendance.  Of course, everyone had on Louboutin’s and Christian was feverishly signing away the famed edition.  A fabulous bar was set up along with a “living room”, tons of appetizers, champagne and the special “signing” table.  A unique collection of Louboutin’s was also on display. Unfortunately, I made a huge fashion error and wore black tights with my Louboutins so you couldn’t even see them! What was I thinking?

P.S. We have a little something special (i.e giveaway)  from the evening but we are not telling until we get closer to the holidays.  Stay tuned.

There are 2 Comments to "Christian Louboutin 20th Anniversary Book Launch"