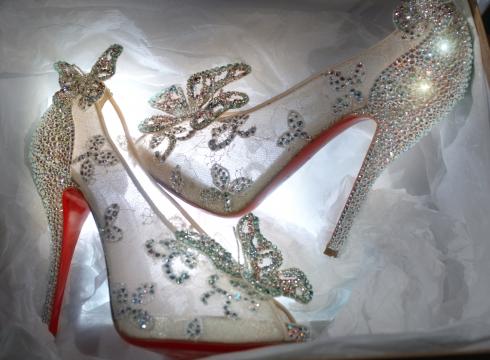 It’s like a fairy tale. Wait, it is a fairy tale. The Blonde and The Brunette knew about this months ago but kept waiting for the official announcement. On Thursday, Christian Louboutin and Disney jointly revealed his vision of Cinderella’s glass slipper. As part of this very special collaboration with Disney, and in the spirit of the fairy tale, the designer will select one lucky U.S. fan as his Cinderella and gift her with a free limited-edition pair. Oh please, let it be me! OK, I’m getting a bit dramatic here.

Why now? Disney is releasing Cinderella on Blu-ray DVD October 2.  In creating the shoe, the movie studio reached out to the designer, because who else would you reach out to but the most coveted and beloved shoe designer in the world. “It’s a very classic fairy tale about love,” Louboutin says, “and the dream that love is absolutely pure.” The Louboutin glass slipper will not be produced for mass sale (rats!), but 20 pairs will be given away worldwide this fall, turning “anyone into a modern-day Cinderellas.”  Disney and Louboutin will release details on the giveaway Aug. 17 and we’ll do our best to clue you in.

Naturally the unveiling was perfectly timed with Couture Week in Paris. Louboutin admitted there were quite a few challenges to creating the shoe.”You imagine it being completely transparent, (made) out of glass,” but “full and classical transparency made into a shoe makes a really ugly foot” and using a plastic such as Lucite “could look very ’60s or sort of punky.” Instead, Louboutin used lace to give the illusion of transparency, paired with a glittering, Swarovski-crystal-covered heel and his trademark red sole. He then added butterflies. Definitely one of the iconic Disney/Cinderella symbols of feminine beauty and the obvious perfect touch.

At the same time, Disney  announced, that Monsieur Louboutin will make his acting debut in a Disney-produced 10-minute short, done in the spirit of Louboutin’s own Disney favorite, Bedknobs and Broomsticks.  It is called The Magic of the Glass Slipper: A Cinderella Story and will appear as a bonus feature on the Cinderella Blu-ray DVD. Louboutin jokingly said “The movie is about how that shoe got invented by the person who is known as the Red Sole Man. Which is me.” Now you can lust after the shoes and the DVD. Disney definitely waved their magic wand with this one.

It really is the most beautiful shoe I may have ever seen. So, what do you think?