Prada Brings Back The Alpha Male and Says Goodbye To The MetroSexual. 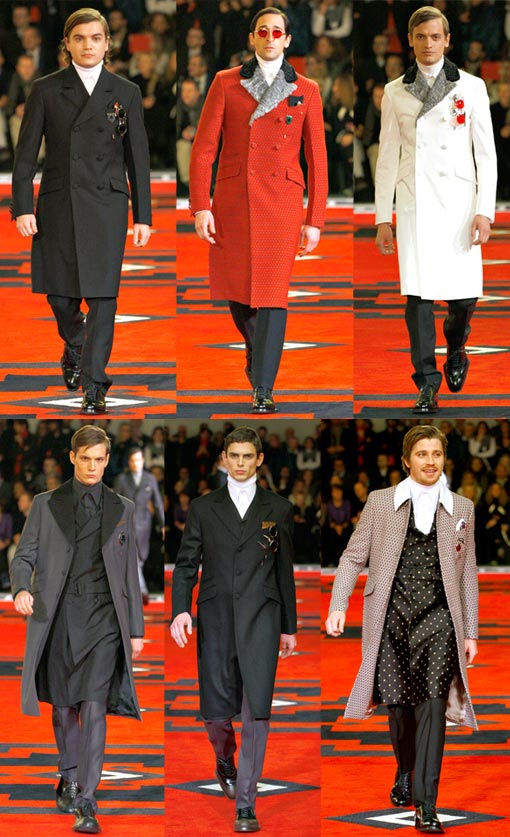 The Blonde and The Brunette don’t usually cover menswear but if you missed seeing the Prada Men’s Show last week, we couldn’t resist sharing it with you. This was the coup of Milan and had the entire fashion world buzzing.  Set on a magnificent square stage with a “Red Carpet”  that was reminiscence of palatial times, this show launched just as the Golden Globes began.  Envisioned as a play on the arch typical male and power dressing all was not as it appeared. Fabrications often ranged from cut denim to cottons and “mock” turtle necks. With Downtown Abbey firmly in my mind’s eye, reflections of Edwardian military and formal dressing, including top coats and suits decorated with badges and dangling sunglasses, reinforced the power statement. There was also a touch of the Eastern Bloc influence.  The closing line-up of models were actually actors from Garrett Hedlund, Emile Hirsch, and Adrien Brody to (not pictured) William Defoe, Jamie Bell, Tim Roth and Gary Oldman. Mrs. Prada remarked the collection “is a parody and a tool of male power and a way to express male vanity.” I call it sheer showmanship. Welcome back to power dressing.

There are 2 Comments to "Prada Brings Back The Alpha Male and Says Goodbye To The MetroSexual."