Hope everyone’s having a beautiful week and enjoying their summer. Let’s see, what’s new this week? Oh here’s a good one. Because we all needed to get shivers down our spines and hear from the devil himself, OJ Simpson has blessed us all with a new Twitter account. OJ joined Twitter just two days after the 25th anniversary of Nicole Brown and Ron Goldman’s slayings. “Hey Twitter world, this is yours truly,” said Simpson in the video post , “Coming soon to Twitter you’ll get to read all my thoughts and opinions on just about everything. So, it should be a lot of fun — I’ve got a little getting even to do.” That’s not scary at all. Nope , not even a little bit. 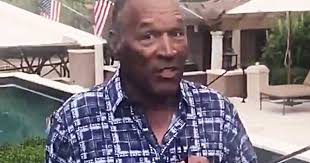 OJ’s first plan of action was to dispel those pesky Khloe Kardashian rumors about him being her real dad. He claims all of those rumors are “tasteless and bad”. OJ should know what that means because he wrote “If I Did It” and showed us all he would never behave tastelessly. I believe OJ thinks he’s having some sort of comeback moment. What is truly mind blowing, is that he already has half a million followers. I just wonder what kind of people are following him? What a world.

Lucille 2 (Liza Minelli) was asked recently what her mother, Judy Garland, would have thought about the movie, A Star Is Born, as she was in one of the original versions. Liza said she was pretty sure that Judy would have laughed at it and then “would have gotten into it”. Well I don’t know Liza, because if Judy was still alive, she would have been 97 years old, so I’m not sure she would be laughing at anything. You know what she may actually laugh at? A lip reading expert was brought in for 10 seconds of film of Prince Harry and Duchess Meghan’s interaction at the Trooping The Colour for The Daily Mail. How slow of a news day is it in the world when the media turns to this. For whatever reason , she kept turning around and asking him something. Maybe she asked him what was going to happen next and he said the anthem is coming up, turn around! Either way, he checked her. End of story.  As of now, if the Daily Mail doesn’t win a Pulitzer for this riveting piece of journalism I will riot in the streets! 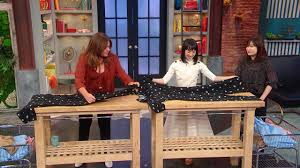 In other news, there’s a celebrity organizer (yes, that’s very much a thing) named Linda Koopersmith who is accusing Marie Kondo of stealing her folding method and called it her own KonMari method. She claims she started it almost 30 years ago. She isn’t trying to sue her or anything, she just wants to be acknowledged as the creator of this folding method. I have a method myself. I just have a glass of wine and toss what I don’t need anymore. It works really well. If anyone steals this I will sue. It’s MY method. There’s only one way to settle this, ladies-let’s have a folding contest at my house. You are both welcome to upright fold all my clothes.

From somewhere near lots of Margaritas and Guacamole,