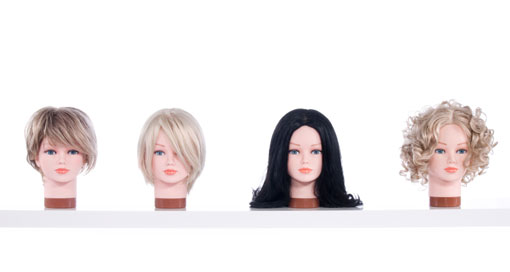 Dear Readers: If you missed Pamela’s first journal entry then we encourage you to click on this link and follow her journey as she navigates her treatment protocol along with the side effects. Pamela is at the end of her first chemo cycle and about to enter her second of four chemo sessions.  Let’s continue to send her our love and support. NJ, The Brunette

IN SHORT – WIGGED OUT!

It was a dramatic day.  With my first chemo cycle nearly complete, unless something significant happens, I won’t be sending further updates.

I finally bit the bullet and had my hairdresser come over to buzz me. Thursday, he gave me a pixie cut so that when I was raining hair, it wouldn’t be so distressing.  Definitely not my best look, but I laughed and said, “It beats bald!”  Now, three days later, I am bald (or rather “buzzed” until the rest of my hair falls out).

I have to admit, having my head shaved was an ordeal.  Early this morning, I texted my hairdresser, Patrick, the SOS he’s been waiting for…  He arrived a couple of hours later with all his tools.  Because he’s done this before, he had a routine.  First, he had me retry on the wigs we’d bought together and he gave each one a hair cut.  Then he brought out the dreaded buzz-cut clippers.  I asked if I should put a towel down but he said no – too much hair – better to have it all cleaned up afterwards.  We locked eyes in the mirror, I took a deep yoga breath, then signaled for him to begin.  He started in back, probably so I wouldn’t be quite as traumatized.  When I saw tears welling up in his eyes, I closed mine, feeling the trickle of my own tears.  I wanted to be brave but it was awfully hard.  My throat burned and stray tears fell unbidden down my cheeks, despite my efforts to hold them back.  I could smell the buzzer as it worked overtime, shearing row after row, sending cascades of hair all around me.  Where was all this hair coming from?  My pixie cut?  How was that possible?  Like the old Volkswagen circus routine where clown after clown emerges from a tiny bug of a car.  By the time, Patrick reached the sides of my head, I wanted to ask him to stop.  It wasn’t painful – but I needed a break.  It was too much all at once.  But I kept silent, summoning brave, wanting to get it over with.  As I looked at myself in the mirror, instead of thinking “cancer patient,” my mind went to all those women in concentration camps being shaven one after the other. That de-humanizing process of being shorn, stripped of your identity.  Was this a past life “moment” I was staring into or had I simply read too many books, seen too many movies…  My mind kept going in that direction and when I began to tell Patrick, I didn’t need to finish.  He knew instantly.  While it sounds melodramatic, Patrick said that not only does he feel that way, but other women he’s buzzed have had the same reaction.  It’s simply too strong, too haunting of an image – and the look is the same.

The once luxurious tresses that defined me lay in heaps on the floor, in every direction, on my lap, in my eyes, on my arms, even bristling from my sweatpants where they felt woven into the fabric, sharp against my skin. The buzzer plodded on, closing in.  I was going to have a Mohawk any minute…  Kind, wonderful Patrick kept exclaiming with love, trying to make me feel better.  We had a one-way dialogue.  He spoke aloud.  I answered in my nearly bald head.  Patrick: “Wow, you have a beautiful scalp!”  Me to myself: Huh???  Patrick: “You have no bumps…  It’s so smooth!”  Me to myself: Bumps?! Do most people have bumps?!  Patrick: “The shape of your head is GORGEOUS (French accent!)!”  Me to myself: Huh???  Patrick: “Really.  You should put a LOT of make up on and have a photo shoot like this!”  Me to myself: That’s not gonna happen!

All I saw in the mirror was me, with my hair being systematically shaven off; my eyes and cheekbones looked the same but the rest of me looked so sad, lost, forlorn, shorn…  Shaking that image, I refocused my eyes and I saw my brother, Mark, looking out at me – the way he looked when he got too short of a haircut – the very haircut I used to give him grief about…  God I look a lot like him when I have no hair!  Then I thought: Oh to have his hair – it’s a lot longer than mine.

Now I am literally “wigged out” – wearing my good wig – the one Patrick named “Miss Fancy.”  And it’s not so bad. But, oh, will I look forward to yanking it off later.  Kinda feels like wearing a bathing cap all day long.

Now where the hell is that tequila?

P.S. We’re planning to have a pink wig party for Pamela as soon as she gives us the go ahead! Love. NJ

There are 1 Comments to "Pamela’s Journal: Wigged Out"