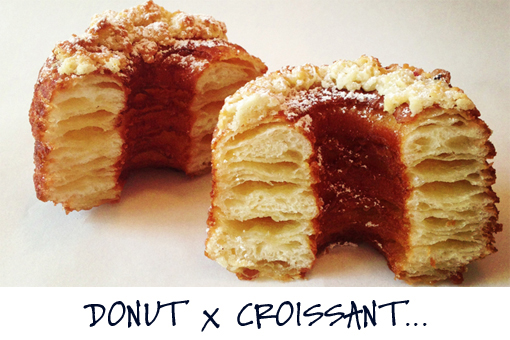 Does everyone remember the “Great Cupcake Craze of 2005,” when waiting two hours in line for a Sprinkles Cupcake was the norm? How about the “Great Pinkberry Craze of 2007, ” which led to an infestation of yogurt shops around the city of Los Angeles? Well, watch out guys, because I think I may have just discovered the newest “craze.”

“Cracking Down on Cronut Scalpers” was a recent article I saw in the New York Times. Cronut? Scalpers? I had to investigate further as to what these so called “Cronut scalpers” were doing, and what a Cronut even was! After further investigation…

A Cronut is a half croissant, half doughnut hybrid — this pastry was created by Chef Dominique Ansel in May, and has already taken the world by storm. After it’s launch on May 10, 2013, Cronut fans spanned the world, making it the most viral dessert item to date.

Not only is Chef Dominique Ansel taking the world by storm with his cronuts, but he gives very precise instructions on how and when to eat them. Chef Dominique requests that 1. Cronuts are to be eaten immediately, as they have a short shelf life. 2. They must never be refrigerated, and  3. If you must cut them, do so with a serrated knife as to not squish the layers.

So where do these so called Cronut scalpers come in? Last month, Cronuts were continuously sold out 30 minutes after opening. Once this caught on, people started buying them in bulk, and then selling them on the street corner for upwards of $50.00 each! If that doesn’t make you want to get your hands on a Cronut even more, I don’t know what will!

There is only one flavor of Cronut every month. The inaugural flavor in May was Rose Vanilla, and for June it is Lemon Maple, I wonder what it will be for July!