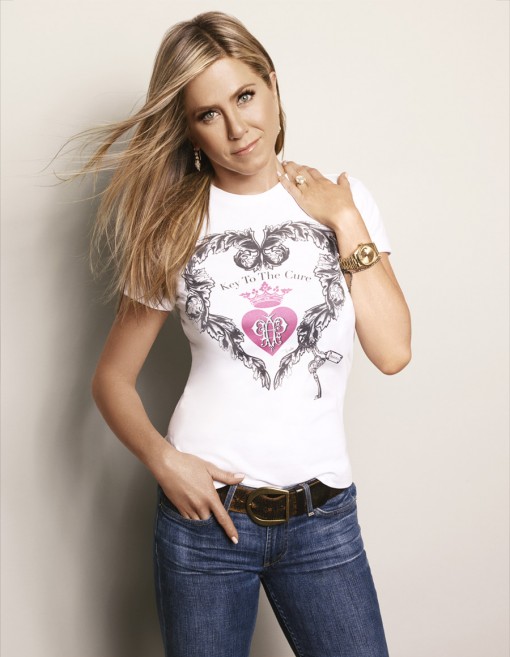 Jennifer Aniston is the new spokesperson for the Saks Fifth Avenue and the Entertainment Industry Foundation (EIF) 2013 Key to the Cure campaign. Controversy is already swirling as many wonder why Jennifer has been chosen for this role versus a cancer survivor or someone who has experienced a personal loss. Having lost a close relative, my mother, to breast cancer, Jennifer gets my vote.

If you are wondering why, it’s simple. Jennifer can bring greater awareness and raise important funds for EIF’s Women’s Cancer Research Fund. By being the “face” of the latest campaign, and modeling the limited-edition Emilio Pucci T-shirts, created by one of my absolute favorite designers, Peter Dundas of Emilio Pucci, she brings important attention to the four-day charity shopping weekend.

I have attended the Beverly Hills Gala, sponsored by Saks, for years and supported the cause. I know the EIF is doing ground- breaking work that is actually making a difference in break-through research and survival rates.

The critical one is an ambitious, first of its kind scientific project, called EIF’s WCRF Biomarker Breast Cancer Discovery Project. World-class scientists have collaborated to identify markers in the blood that signal the presence of breast cancer.  These findings could, one day, lead to the development of a blood test to detect breast cancer in its beginning, most-curable.

Isn’t that what it’s all about?  In the 14 years since the inception of the Saks Fifth Avenue charity shopping weekend, Saks, together with its vendors and partners, has raised over $33 million for cancer research. Organizations benefiting from funds raised via the campaign include: The Breast Cancer Research Foundation; EIF’s Women’s Cancer Research Fund; Cleveland Clinic; Boston’s Dana-Farber Cancer Institute; Nevada Cancer Institute and many others.

My hope, just like Aniston expressed, is “that everyone will contribute to this worthy cause by purchasing a Key to the Cure T-shirt designed by Emilio Pucci.”  The limited-edition tee will retail for $35 at Saks Fifth Avenue stores, Saks Fifth Avenue Off 5th stores, and online at saks.com starting on October 1. One hundred percent of the proceeds from each shirt sold will be donated to EIF’s Women’s Cancer Research Fund. Saks Fifth Avenue’s charity shopping weekend will take place Thursday through Sunday, October 17 to 20. During the shopping weekend, 2% of participating vendor sales up to $500,000 will be donated to the Entertainment Industry Foundation.

Finally, if you didn’t know, Aniston has been a long-time supporter of cancer causes. Beyond being a huge celebrity ally of Stand Up 2 Cancer, in 2011 she directed a short film for Lifetime’s “Project Five,” a series about women fighting breast cancer.

I promise to remind you when we get closer to the event. I love when fashion and a good cause come together. Thank you Jennifer, Peter and Saks. Love you Mom!