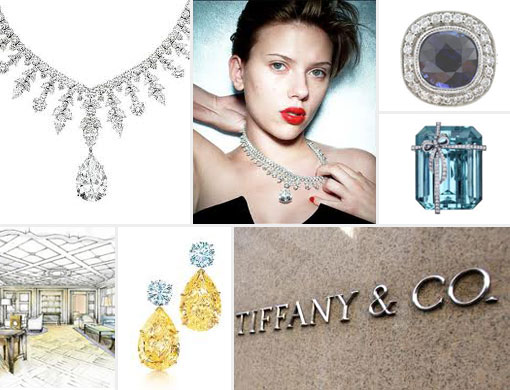 Almost no one knows about it and you need a special invitation to see it. It’s the ultra Private Salon at Tiffany’s. It debuted ever so quietly last December and it’s the special home to 0ne-of-a-kind Tiffany pieces which are  viewed in equally amazing surroundings. The Blonde and The Brunette had a special invitation to visit it when we were in New York last week and it was a unique glimpse into the special world of Tiffany.

Naturally, we asked about the origin of the Private Salon.  “It’s not a selling room, per se”, says Tiffany & Co.’s Michael Kowalski of the new by-appointment-only Salon on the mezzanine of the Fifth Avenue flagship.

“We like to think of it more as a discreet space where the discerning collector can view the best we have to offer and can work with our artisans and archives on custom design.”

In a palette of soft silver and pale grays with mirrored cast glass, the salon is more like a living room “where people bring you diamonds instead of martinis”, according to the noted architects Robert A.M. Stern who designed the space.  The neutral tones were selected so the diamonds, rubies and anything else a woman may wear won’t clash with her gown.  There’s even a secret dressing room for celebrities and mere mortals to change before a big event.

If you are invited, The Salon, is just off  Tiffany’s Patek Philippe watch suite, which consists of a series of rooms reached by a private elevator.  Clients enter through two magnificent brass doors (which I suspect have been patterned after a 1956 Tiffany window display).  The waiting room is done in a pale robin’s-egg blue—and then you enter the main salon. It’s a soothing experience that allows you to absorb each piece of jewelry displayed in very special bronze vitrines inspired by 17th-century French decorative stands. Even the lighting was specially commissioned.

Of course there are also some very special touches:  a fully-stocked wet bar, the private dressing room, and the atelier right off the main salon, where clients can review sketches and their custom commissions on a bleached wood table.  And, of course, we did see everything from unique, carefully selected colored diamonds to amazing necklaces. The Salon is by invitation only.  At 727 Fifth Avenue, New York;  tiffany.com.

There are 3 Comments to "Tiffany Private Salon-By Invitation Only"