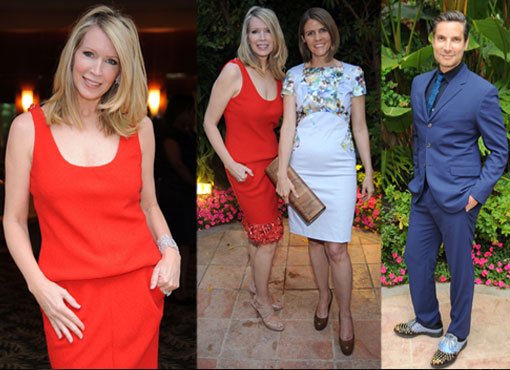 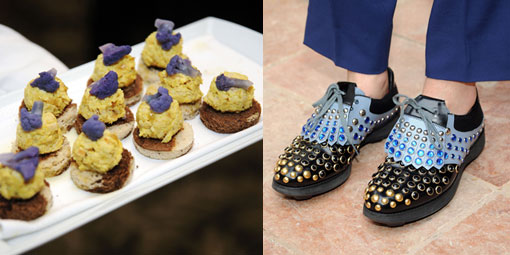 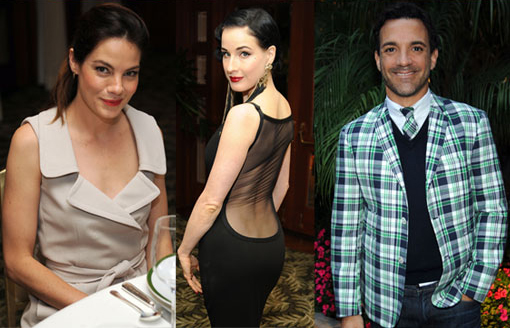 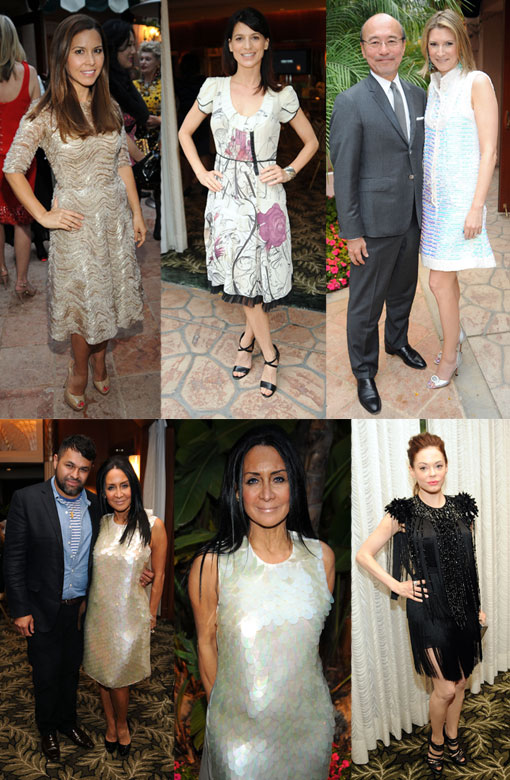 It’s always one of my favorite nights of the year when the Friends of The Costume Institute get together for the annual West Coast dinner. This year, Susan Casden and Cameron Silver hosted the event in honor of Harold Koda for Schiaparelli and Prada: Impossible Conversations. Held in the very beautiful and private dining room of the Beverly Hills Hotel, the fashion theme for the evening seemed to be the LBD, the LRD, serious embellishment (those are Cameron’s Prada shoes above) or for the majority of party goers, the LWD  (and I wore a white paillette sequin, “fish scale” Prada).

The evening was filled with special touches from the Prada Flame Shoe party favor to the Polo Lounge signature menu, with many of the guests, including Dita Von Teese, Monique Lhuiller, Perry Reeves, the amazing designer Juan Carlos Obando, Rose McGowan, George  Kotsiopoulos from E! Fashion Police, and Michelle Monaghan, opting for the famous Mary’s Fried Chicken. I did.

Harold Koda, Curator extraordinaire of the Met Costume Institute, winged his way in from the big apple along with the wonderful Lizzie Tisch, the major benefactor of the Costume Institute. Andrew Bolton, the curator of the exhibit was sorely missed, as he was back in New York and under the weather. Harold Koda brilliantly stepped in and regaled us all with some of the intimate behind the scenes snippets of the exhibit. However, he kicked his dialogue off by screening the Impossible Conversation video. The eight short videos in the exhibition were created by Baz Luhrmann. In the videos, Miuccia Prada talks with Schiaparelli, who is played by actress Judy Davis. “Schiap” and Prada are seated at a dining table in a dialogue created using paraphrased excerpts from Schiaparelli’s autobiography, Shocking Life, and Prada’s filmed remarks.

Harold revealed to dinner guests,  Muiccia Prada, filmed her “conversation”, seated at a desk in a New York City hotel suite,  remotely directed by Luhrmann, via Skype, from Australia. This made the collaboration even more remarkable. Harold went on to explain that these “two powerful women are talking to each other but not listening to each other.”  That is exactly the point. Even with the comparisons, one shoe versus the other designer’s shoe, one dress next to the other designer’s dress, nothing is the same.  Within this conversation, the differences become louder and more distinct with Mrs. Prada espousing that she does not like any kind of obvious beauty, especially from the waist up, hence her famed exhibit and focus on the waist down, while Schiaparelli is very focused on the waist up, espousing that beauty is funneled towards and captured in a women’s face. Mrs. Prada even takes this a step further by stating there is a distinction between your “interior and exterior life” and, with age, women can become wilder; and so we should. Mrs. Prada is freeing us and herself from the restraints of youth and conformity, to be ourselves, and for her to become the artist she truly is because sometimes “That’s not Prada. That’s fashion”.

To enjoy the filmed remarks, just click on this special link to the Met exhibition videos.  You’ll have the impression of “eavesdropping on a fantastical meeting of two great fashion minds.” I hope you enjoy it as much as we did.