What Just Happened? From Sideways Burrito’s to Separate Royal Courts

Hi Angels! How’s everyone’s week going? I’m loving this Halloween week so much. Nothing more fun than telling my kids they can each take ten candies from their Pumpkins and throw away the rest. And by “throw away the rest,” I mean I put ALL the rest of that candy in my side table and eat it all month long like an animal.

You know what should be made into a horror film? The current story happening in Sofia Vergara’s life. 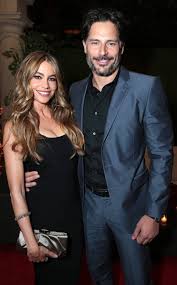 Let’s talk about this total nightmare that’s been in the news this week. In case you guys have forgotten about this saga, the stunning, Colombian version of Fran Drescher, Sofia Vergara, who is currently the highest paid actress on television and married to the hot AF Joe Manganiello, used to be engaged to this disaster of a man, named Nick Loeb. When her and Nick were together, back in 2013, they had fertilized two of her eggs and put them on ice. They ended their relationship in 2014. Sofia has clearly moved on with her life and got married and has continued being really pretty and really rich. Nick Loeb has been suing her ever since they broke up because he claims that the frozen embryo’s (he has officially named them Emma and Isabella), are meant to come into the world and he demands that she acknowledge them and let them be carried by a surrogate. He has also set up trust funds for them, because… well…obviously he did. Amongst the many issues that are in play here, one of them is that she DOESN’T want anything to do with him and she certainly does not want children with him. They both signed an agreement that stated if they ever broke up, these embryos would never be implanted. He recently fathered a child so this is not about his dream of being a dad. She also doesn’t want to pay child support and be tied to this guy forever. He keeps changing his residence and filing new cases! This is putting stress on her and her husband. We clearly have a Stage 5 clinger here. I guess she regrets buying his pick up line…”How do you want your eggs in the morning, scrambled or fertilized?” No but seriously, poor woman. I can’t believe that she has to deal with this insanity. I’d sue him back for pure stupidity. I wish her and her husband the best of luck and as it’s Halloween week- maybe she should surprise Nick by EGGING his house. With one egg called Emma and one called Isabella. 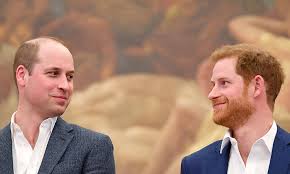 In very important Royal news, Prince William and Prince Harry, who have shared a royal office their entire professional lives, have decided to get their own offices. It’s also been reported they’re going to create two separate courts. This is exactly like the time my two kids got their own rooms, except for they didn’t get their own separate courts.
My question is what did they do in their shared offices? Seems like they go on a lot of tours and they wave at people. Do they each want their own office wall to have it’s own projector with different pictographs and PowerPoint’s on various waving techniques?  I don’t know. But I do know that having separate courts sounds very serious and important. 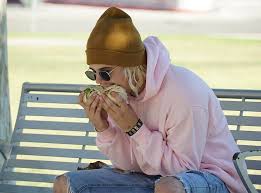 Has anyone seen the picture of Justin Bieber eating a burrito sideways? Oh who am I kidding of course you have.  I missed this scintillating news when it broke. Well it turns out, it was a Justin Bieber look-a-like and it was for a TV show. I’m just happy to hear that because that photo was really weird and triggering for me. Also, there’s 5 minutes of my life I will never get back.  RECLAIMING MY TIME. Turns out nobody cares! Except I do want to know what kind of burrito it was. Not sure what’s worse, being a Bieber impersonator and having to dress like him during his current unwashed hobo phase or being so desperate for attention you cook up an elaborate plan to make people think Bieber bites a burrito in the center?
Well my darlings, that’s my update for this week. Stay safe and don’t drink and drive.
From somewhere nowhere near any Royals and lots of nonfat, sugarfree and caffeine free lattes,
Julia Obst