Who Stole The Red Carpet? 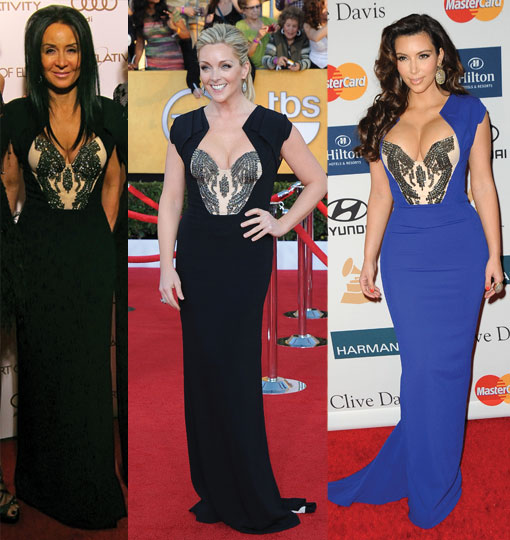 Before we go into the Oscar frenzy on Sunday, I am putting myself out there because Jane Krakowski, Kim Kardashian and I all wore the same (or almost the same) Antonio Berardi dress on different Red Carpets. I love this gown and wore it first to The Art Of Elysium Heaven event held the night before the Golden Globes. Jane Krakowski wore it the next night at the Golden Globes, and it was pretty much a media thumbs down for her which, made me very sad as I thought she looked lovely. It then made another appearance on Kim Kardashian (in what I suspect is a one-of-a-kind blue version) at the Clive Davis Grammy Party. I have to admit, I also saw a cocktail length version last night at the Vanity Fair Party I attended at the Bel-Air Hotel. My personal opinion is it’s a showstopper despite the pseudo fashion press misunderstanding of the built-in bejeweled corset. On a personal styling note, I probably should have pulled my hair back to show more of the beautiful neckline and my earrings. So, what do you think, did they steal my look?

There are 3 Comments to "Who Stole The Red Carpet?"