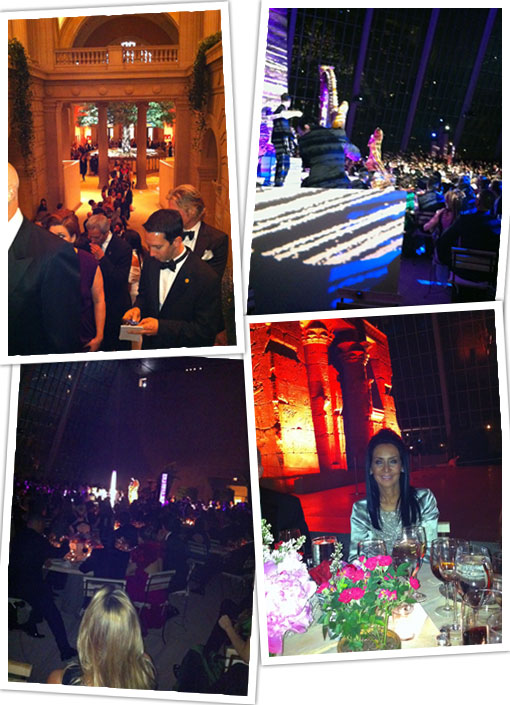 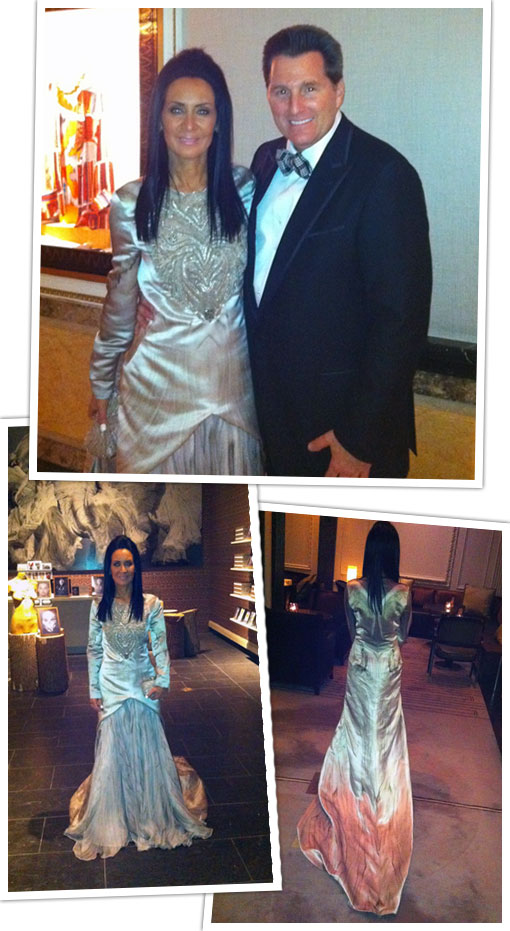 We made it out the door(on time) and headed uptown. It wasn’t raining and we perfectly planned our departure for a 7:15 arrival.  The Met is on Fifth at 82nd and everyone is  directed to 85th street and then a line of black limos and SUV’s, which extends for blocks,  moves slowly down Fifth Avenue at a snail’s pace toward the tented entrance.

With security on a high alert, spectators are only allowed  behind  barricades across the street to breathlessly scream  celebrity names. We exit our car and on to a mobbed Red Carpet ( and by the way 580 press credential have been issued. More than ever before) to face the daunting task of the first of two staircases. We wait patiently with Demi Moore to my left, Tom Ford and his guest, model Carolyn Murphy (in an amazing black lace creation with a long train), in front of us (and exchange small talk). We bump into Derek Lam on our way up the stairs, with Giselle and Tom Brady taking the lead. She looked spectacular.

This is how it works. There are so many guests going up the stairs at the same time everyone is let up in small groups to the first entrance. This is the gauntlet for all the celebrity photos. I must add, security and attendants were all dressed in handsome kilts and suits with the famous McQueen plaid as a dashing sash.

Safely inside the museum, the next step is gathering your table assignment and moving up the next 80-odd steps to be greeted by Anna Wintour in a spectacular sequined gown, Stella McCartney (who I have met before and we exchanged some brief small talk), the dashing Colin Firth, Selma Hayek (who looked amazing) and her husband Francois Pinault.

Before moving on, we look down the staircase and take in the enormous fashion extravaganza. I am not sure what the media is going to report but I have never witnessed so many spectacular ballgowns with dramatic trains and styles (and not many guests were actually in McQueen). Gisele and Christine Ricci (with and wearing Zac Posen who also said hello)were certainly two of the most spectacular. Close by, Jennifer Lopez and Mark Anthony are making their way through the reception line as well. She wore a dramatic red gown but I didn’t think it was one of the best of the night. And at the end of the evening, they are one of the first couples to dash out as fast as they can.

We move on to the exhibit and it is breathtaking. It is hard to imagine that so much creativity has sprung from one mind. Lauren Hutton and I marvel at the shoes from one of his last collections while Ashley Olsen (in  a column gown) is as mesmorized as we are by the famous McQueen hologram featuring Kate Moss in one of his designs.

As we move to the close of the exhibit, I  pose in front of his final collection (which my gown is from) and the Savage Beauty poster which features the same fabric. Then it’s on to the cocktail reception, dinner in the Temple of Dendur followed by Mayor Bloomberg’s welcome and thanks. Colin Firth and Stella McCartney introduce the fantastic Florence Welch and The Machine as she sings the iconic song from Sex and The City (you know Carrie and Mr Big in the happy Paris ending); and, Sarah Jessica Parker was there, looking great in a dazzling column dress.

I promise to report more details tomorrow and send the picture of the blonde and the brunette in the same dress.

There are 1 Comments to "Alexander McQueen: My Savage Beauty Diary /The Gala & More"