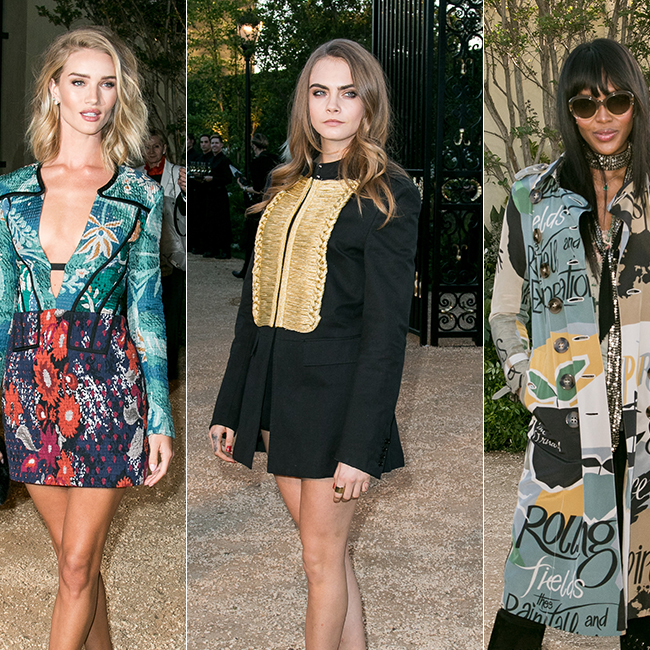 The Fashion World has gotten the email, instagram, the activation, or whatever you want to call it but LA is the place to be and Thursday night at the Griffith Observatory, Burberry brought all the British swank and pagination to create an evening that brought London to Los Angeles. I had the time of my life. It was a thoroughly British and LA crowd and will long remembered as the perfect British invasion perched high atop all of Los Angeles. Helicopters even circled above to film the proceedings as it was the largest Burberry undertaking in North America-ever! 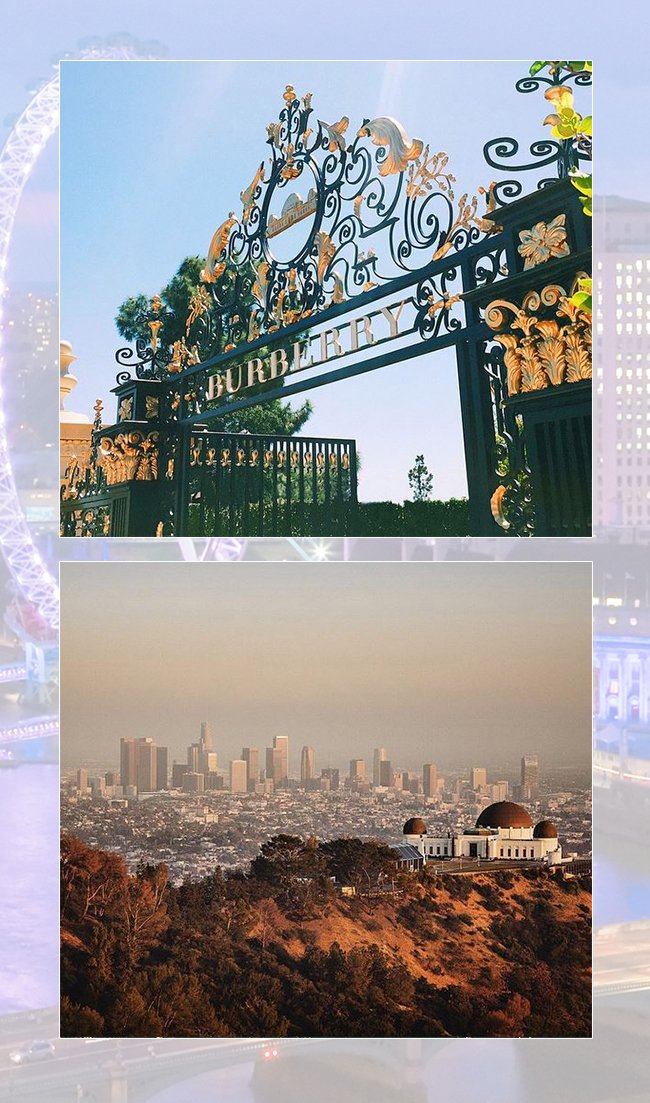 The night literally unfurled with massive British and American flags as one approached from the winding road to be dropped off for the evening. We were all met by the gates of a Burberry palace for a Garden Party and night complete with gravel flown in from England (and I still don’t know if that’s accurate)  that also served as the celebrity step and repeat for the likes of everyone from Rosie Huntington-Whiteley, Cara Delevingre, Naomi Campbell (who also walked the show), Anna Wintour, Kate Beckinsale, to Mila Kunis, and a very pregnant Jamie King in a sheer Burberry look.   Almost everyone was dressed in Burberry, many dressed by the house, in Spring and Fall 2015, along with loads of Burberry black Trench Coats given to guests to wear in advance. Keep thinking British invasion. This time fashion and how they immersed the crowd in Burberry and the “Britishness!” 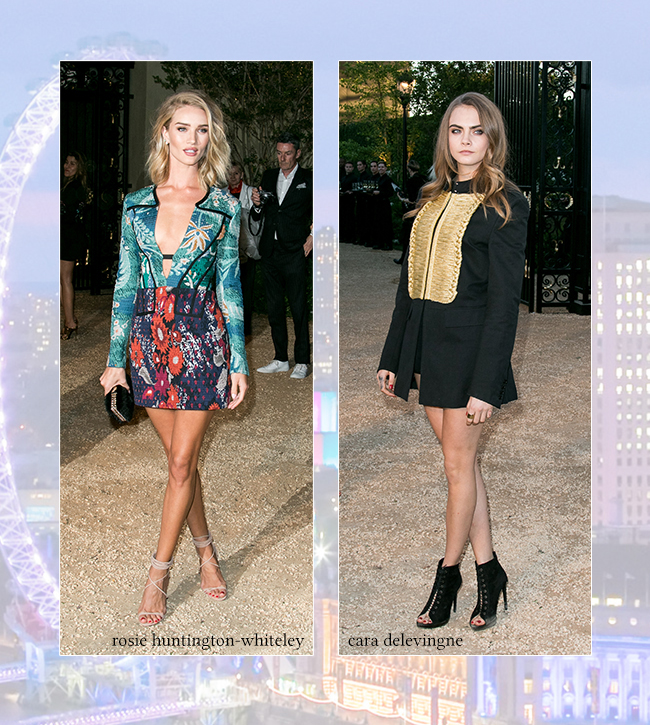 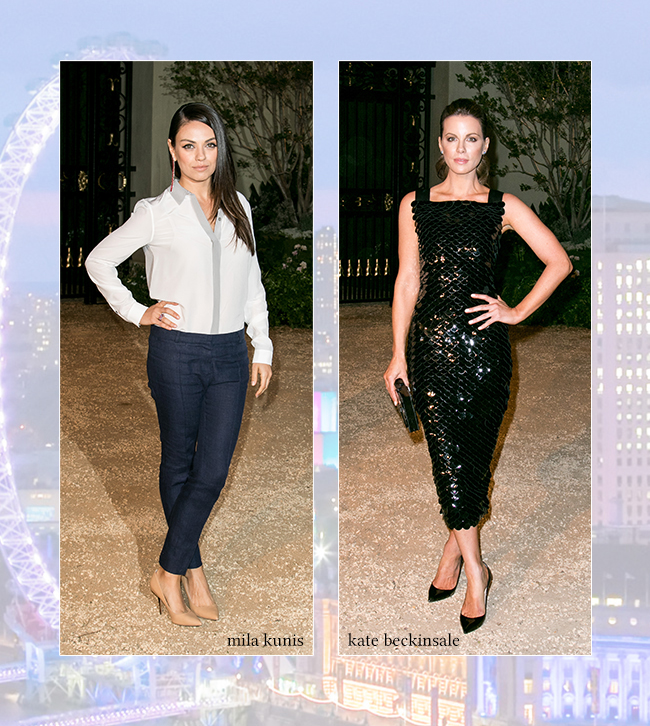 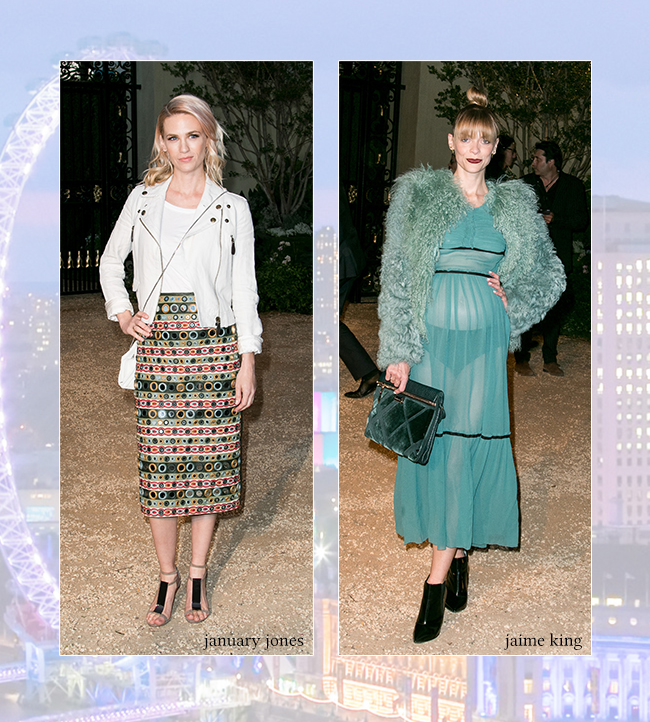 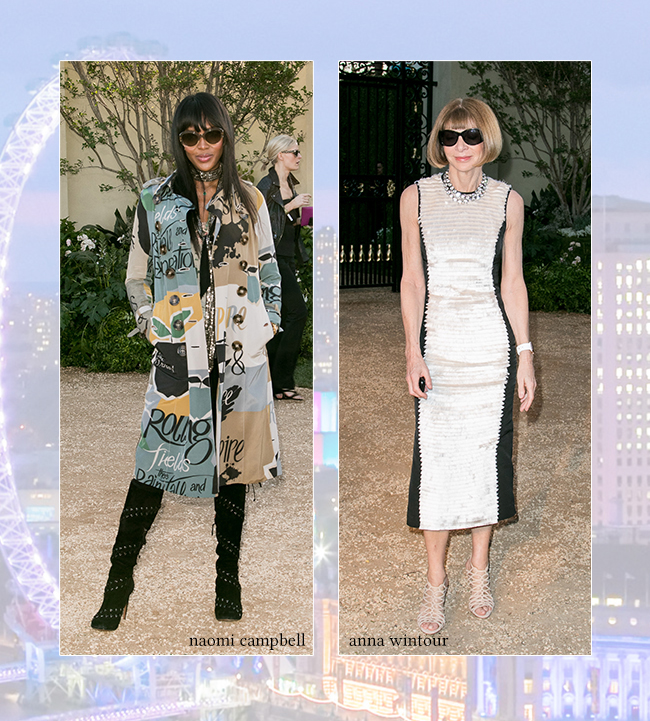 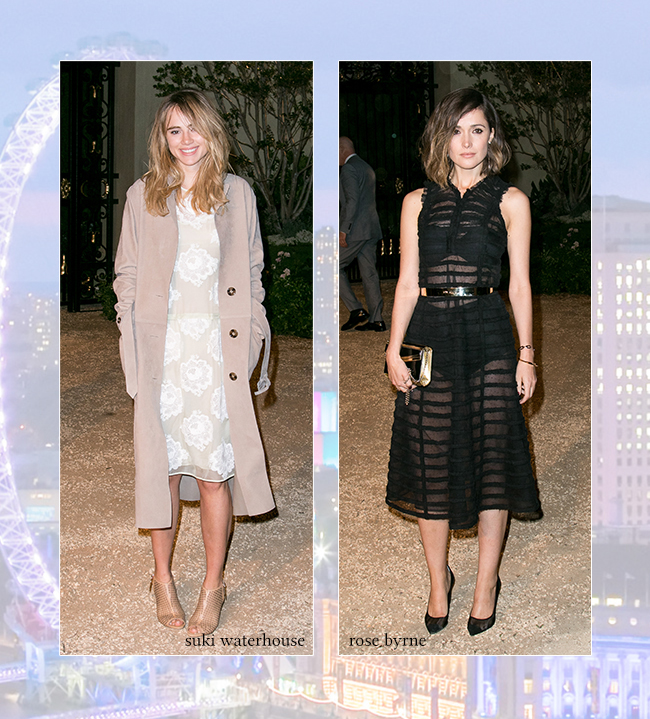 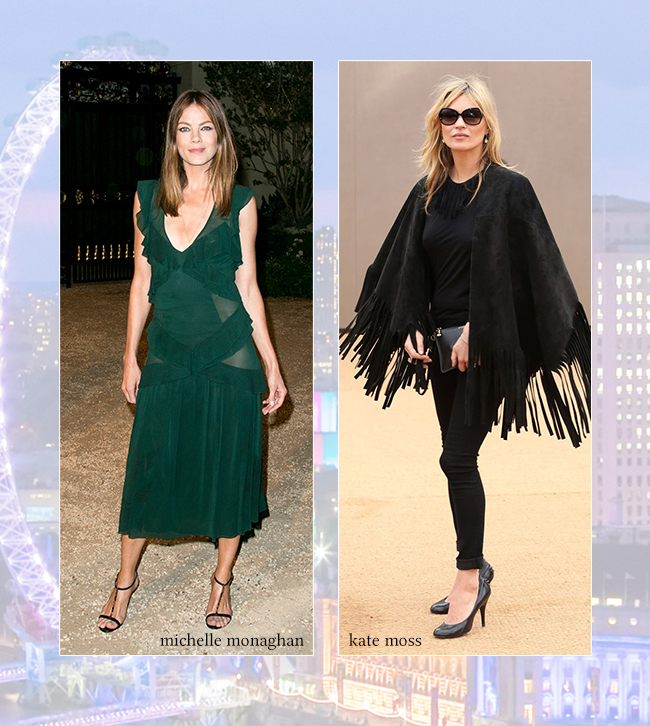 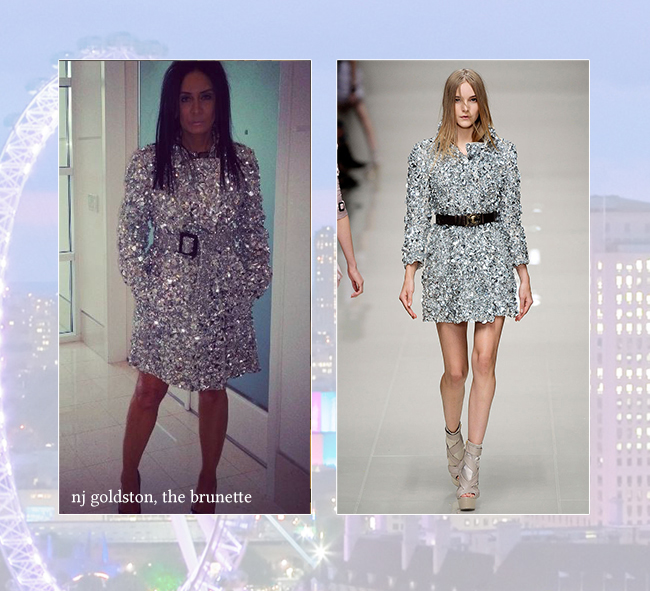 I wore  my vintage silver embellished Burberry Trench Coat from the 25th anniversary collection (which is almost five years from its runway debut). That’s why I really do shop my closet.  I also choose this look as I thought everyone would be in the current collections so I’d zig while they were zagging. After all, it gets chilly in LA and why not  sparkle like the evening. Also, take note, I continue to see hem lines drifting towards the midi as the bohemian look takes off but I went short for the evening.

We all then walked down a typically English Garden path and took in the beautiful  sunset and champagne at a Garden Party. Then magically, at dusk we were led to one of the most massive and beautiful tents any of us had seen for a thoroughly Burberry experience. Remember the British know how to put on a show. 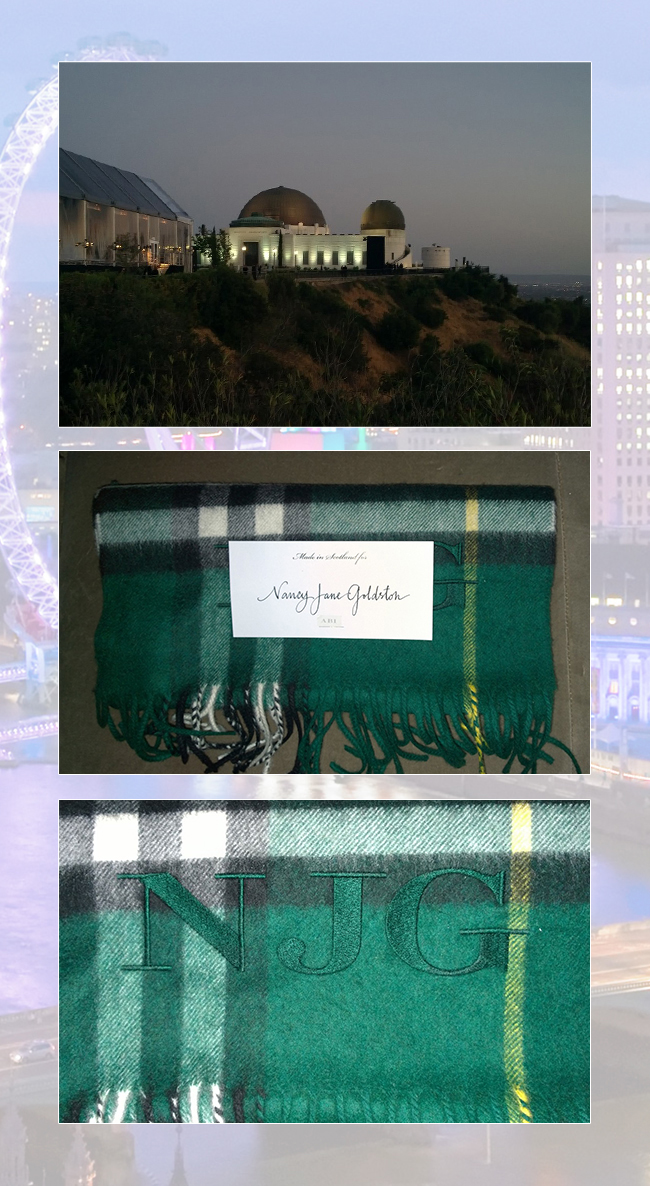 Inside, with over 500 guests, the tent and runway was a set in traditional Burberry colors and at each seat our very own, monogrammed, custom-made in Scotland Burberry scarf for our seat assignment. It doesn’t get better than that and I must thank Burberry for my amazing seat. Remember  it’s all about the scarf and everyone donned theirs right after the show.  More clever social media coverage as you have 500 influences Instagramming away.

With a front row of the entire Beckham clan, Elton John and Anne Wintour, the excitement built. The massive drapes opened and the show started. I literally was so close to the runway, with my amazing seat, that I could  enjoy the live performances of  the thoroughly British, stellar singer-songwriter line-up comprising , at the piano (and accompanied by violins and back-up singers) George Ezra, Tom Odell, Clare Maguire, and Benjamin Clementine (singing “I Love London”) including Maguire’s rousing rendition of The House of the Rising Sun. 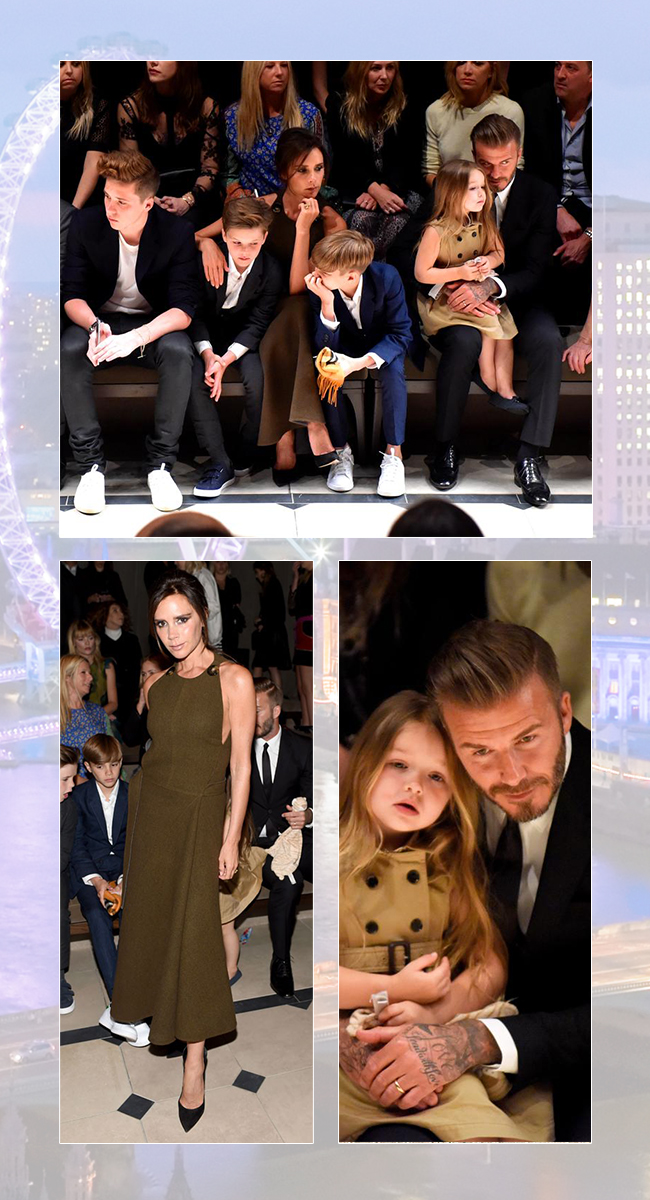 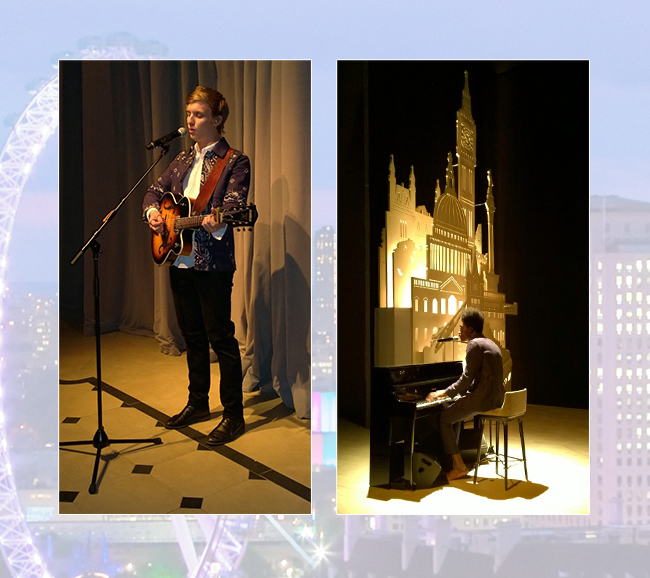 If you missed the Fall 2015 show in London then here it was again but more, more, more and they showcased both the men’s and women’s collections along with exclusive looks brought in for the evening.  Brilliant! A global branding statement on a massive scale that literally re-engaged the audience and consumers worldwide. 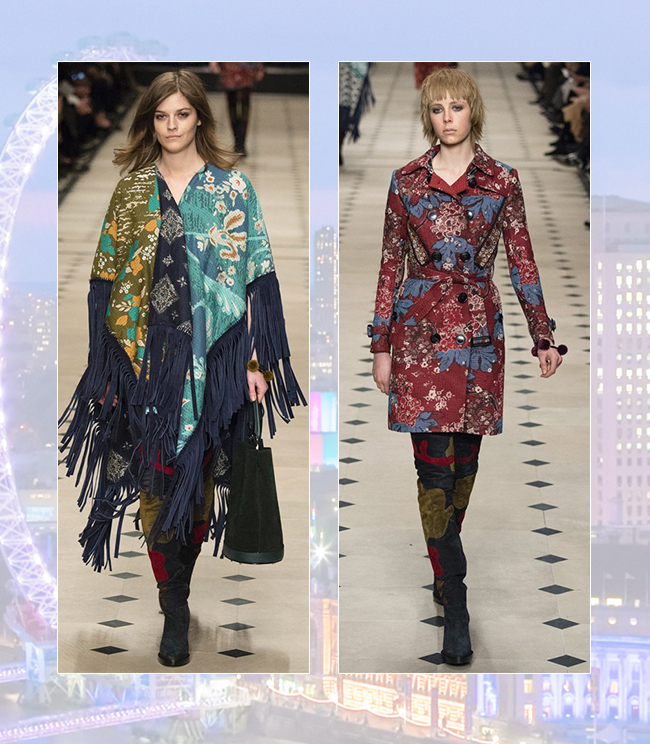 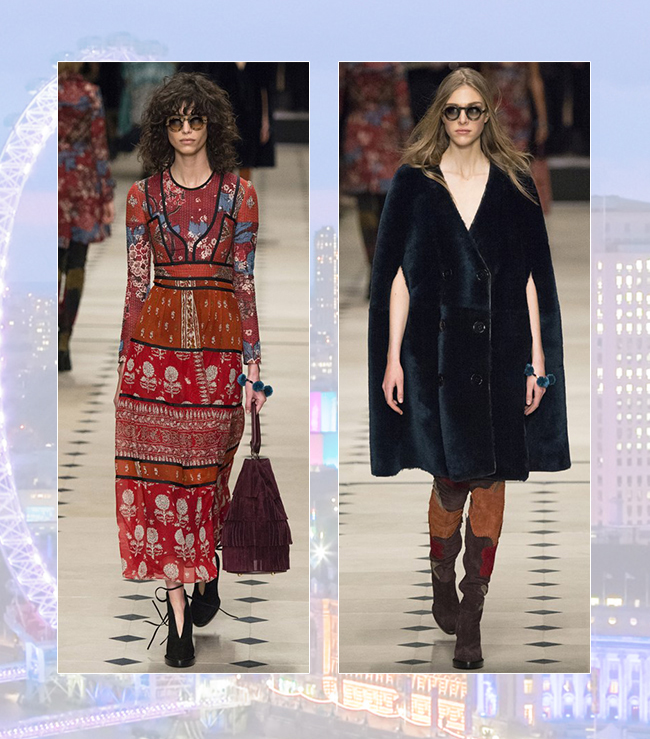 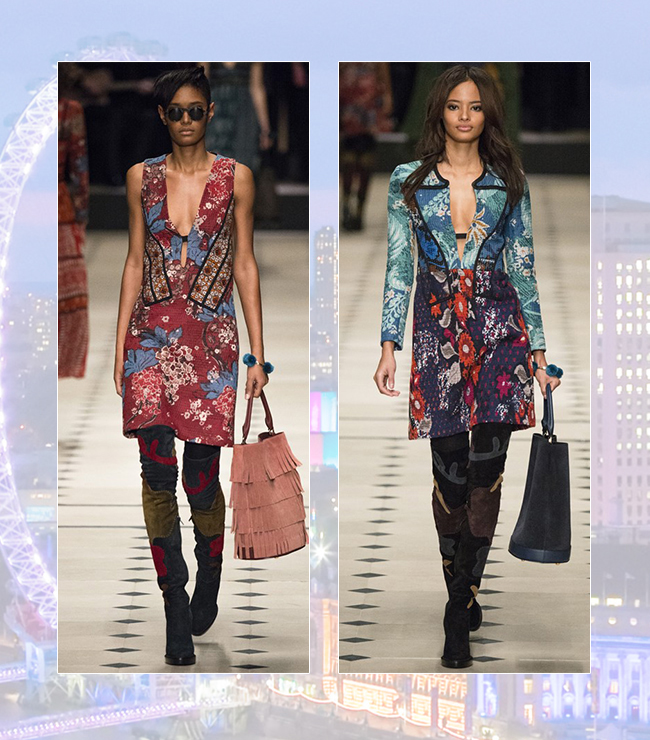 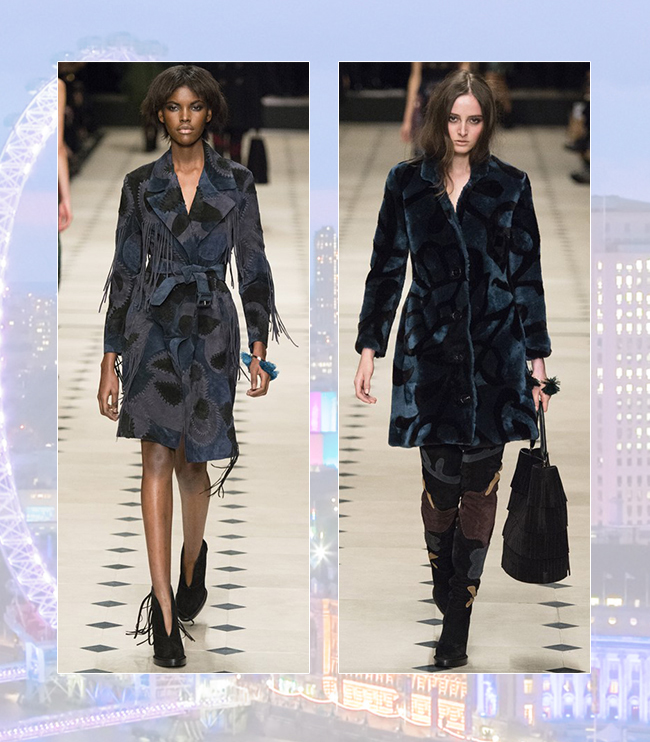 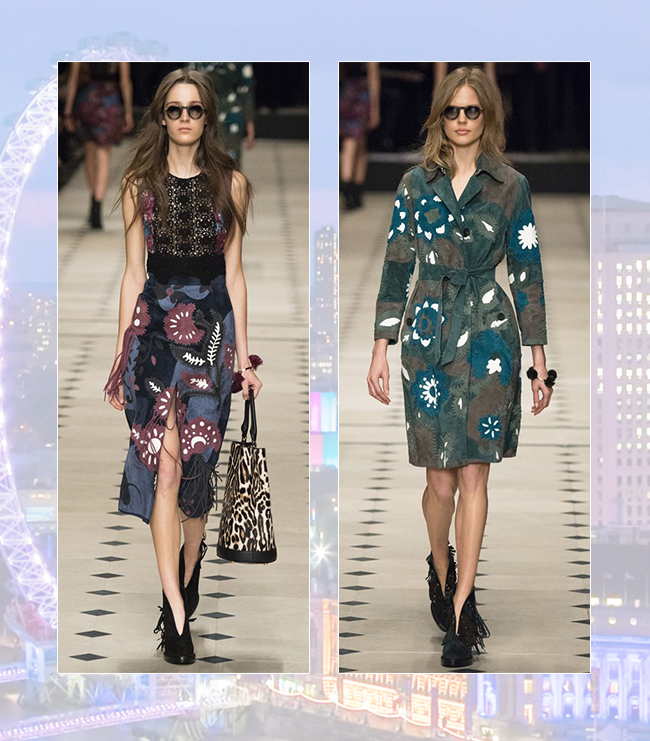 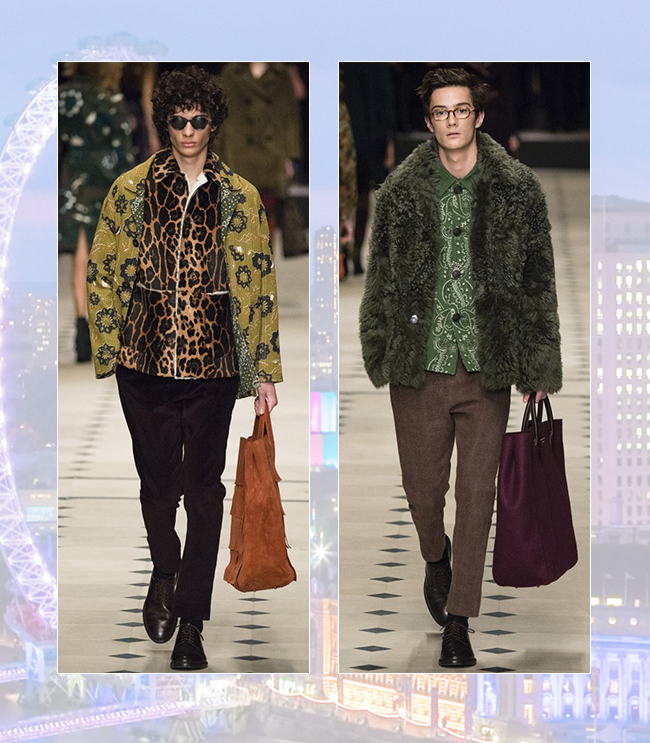 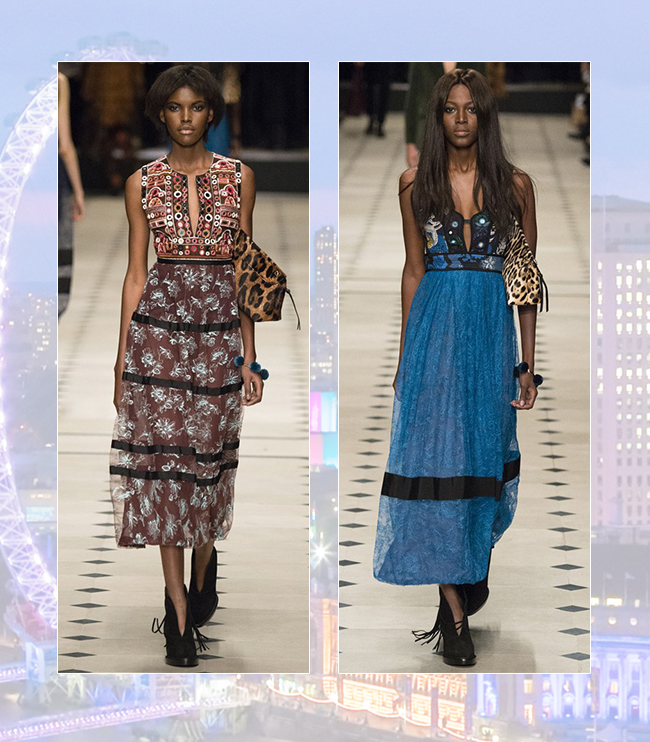 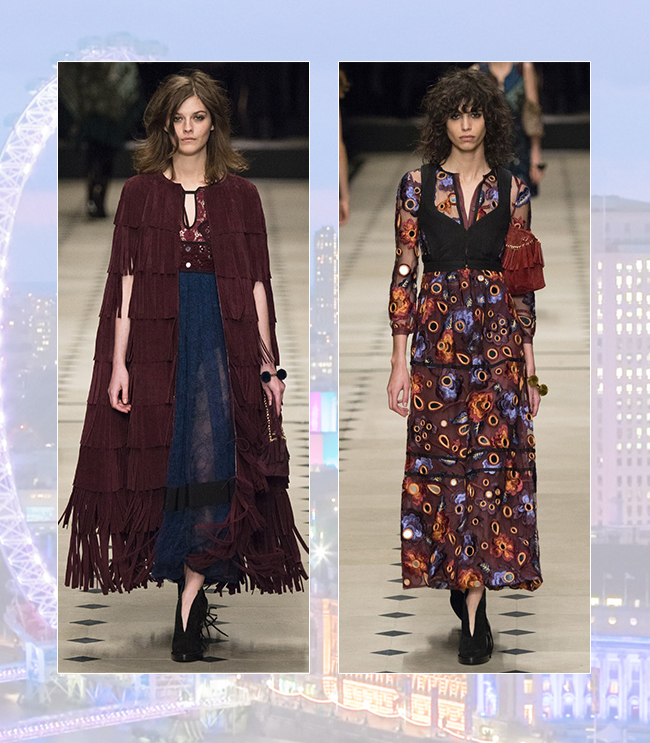 As the show came to a close, a combination of the Queen’s very own Horse Guard, flown in from England (wrap your mind around that and getting the necessary permissions) led the catwalk march to what we all thought was a close tented. Wrong. Instead, the finale included every model in stunning, exclusive Burberry evening wear as they followed the Guard through massive curtains that opened. 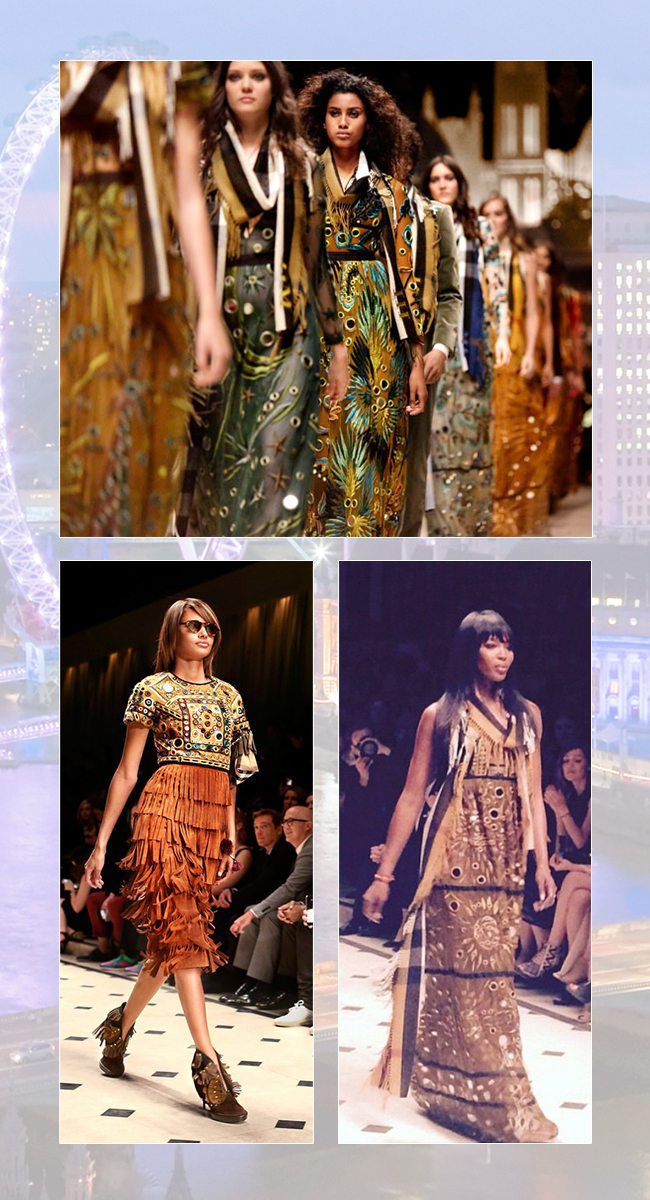 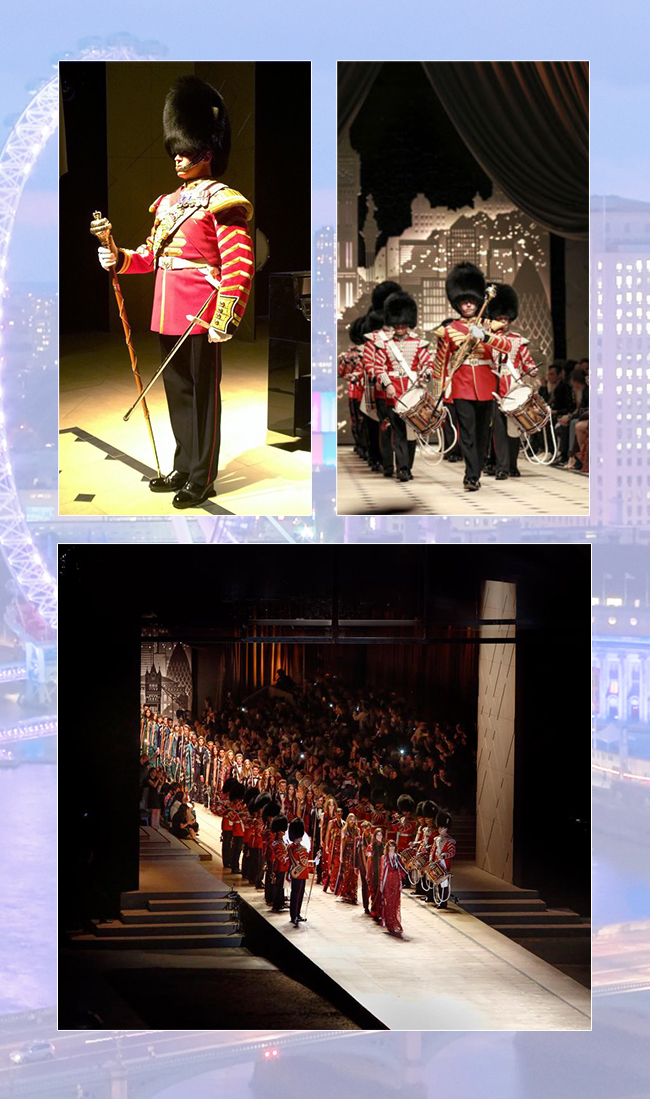 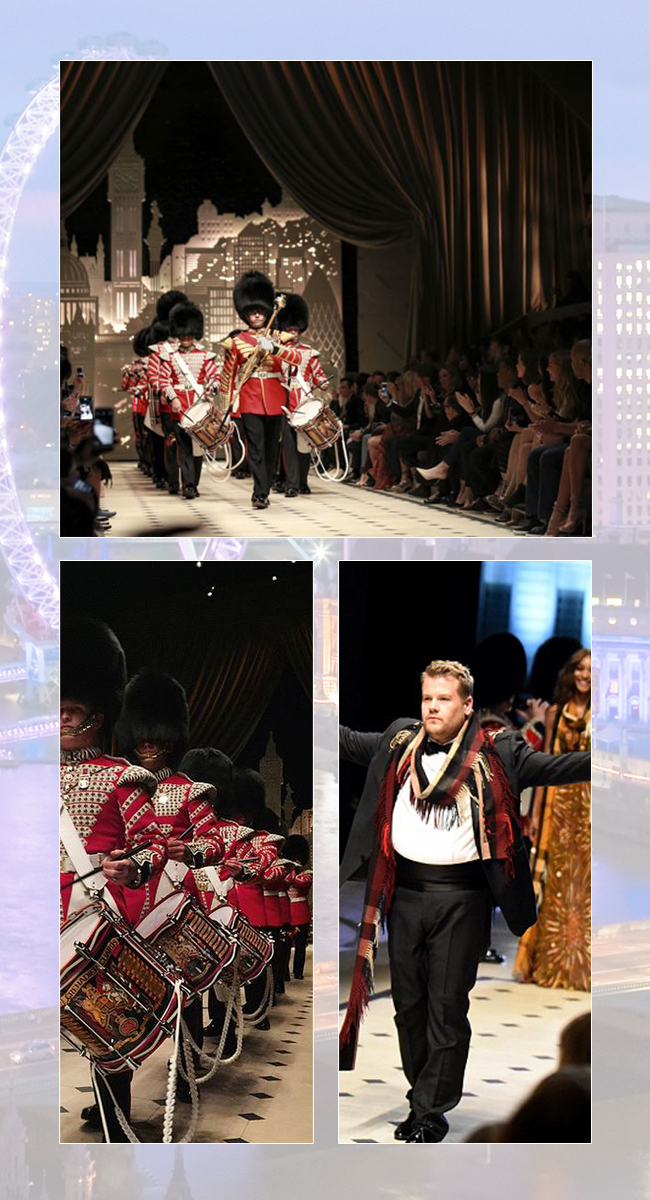 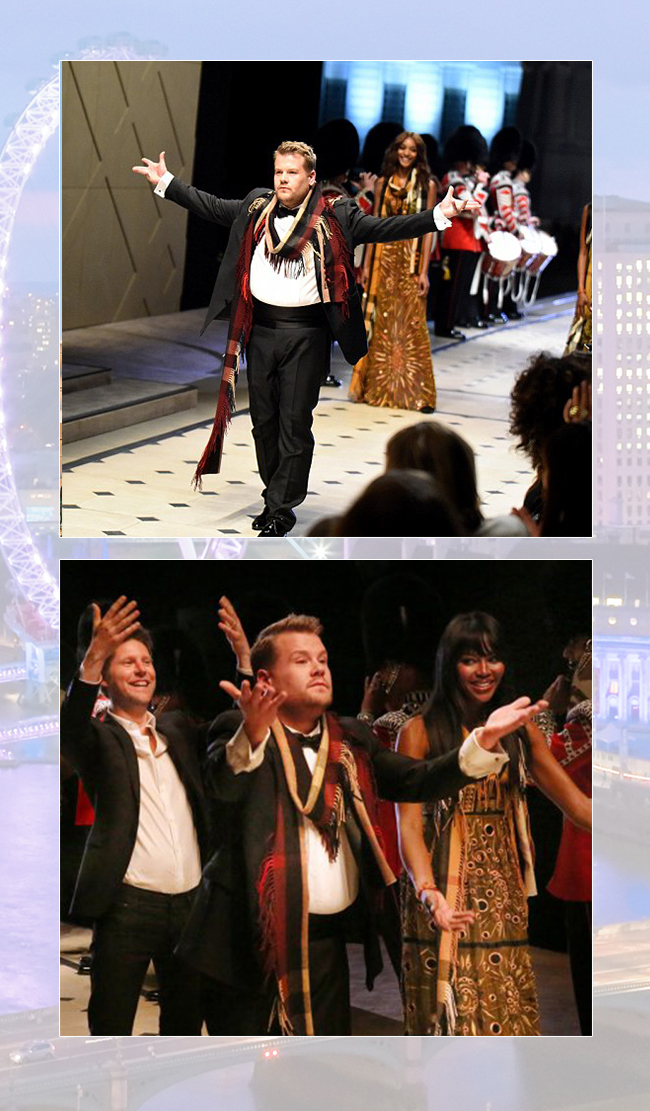 The surprise continued as Naomi Campbell closed the show along with James Corden humorously marching out as Christopher Bailey followed by Christopher Bailey! The guard led the way but to where? The drapes at the other end of the tent opened to reveal the Griffith Observatory and a light show on the face of it with the British and American flags.  Standing ovation. The guests followed suit and we were all under the stars together for an after party that included posing with the guards, drinking all type of champagne, thoroughly English drinks and mini pot pies and Burberry scarves wrapped around every neck to stay warm. 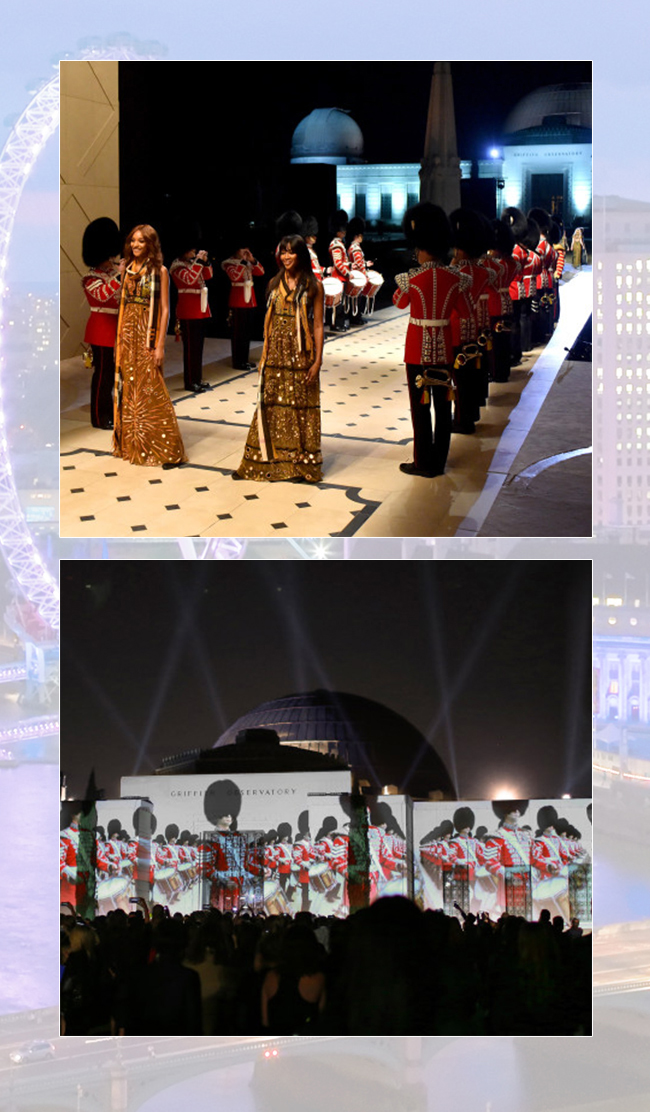 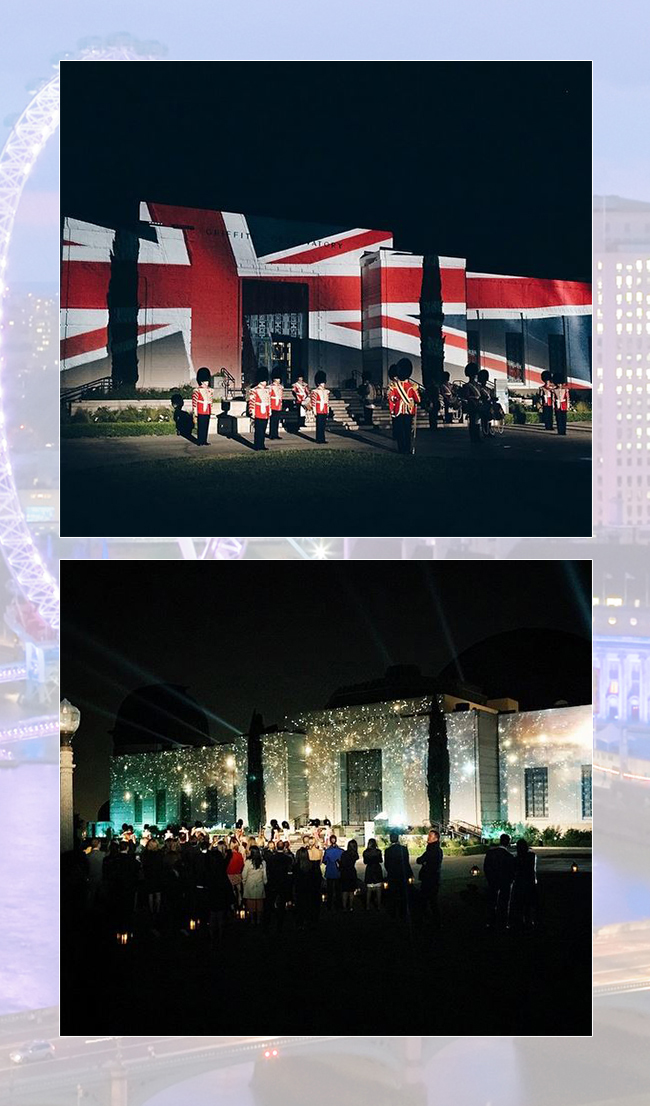 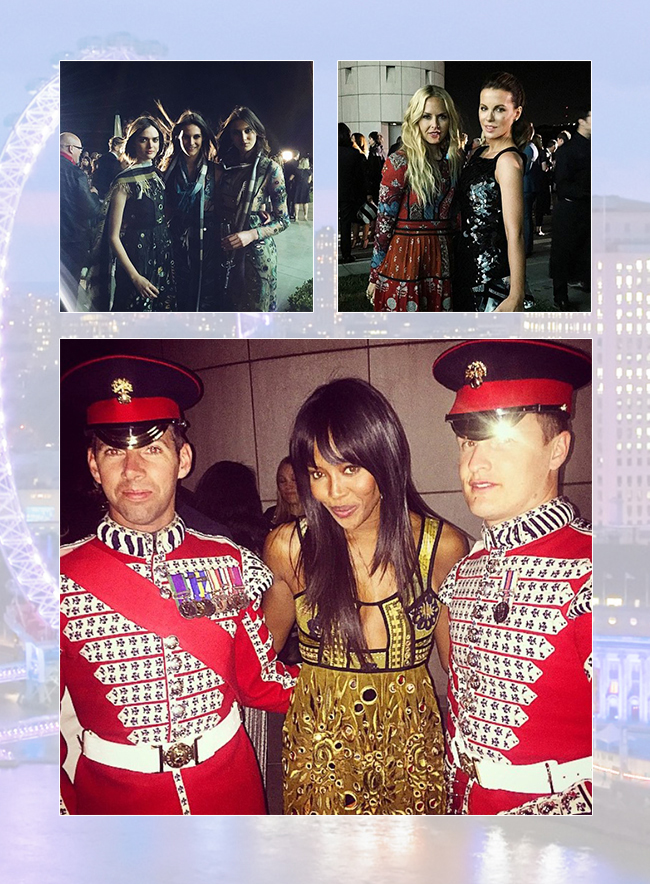 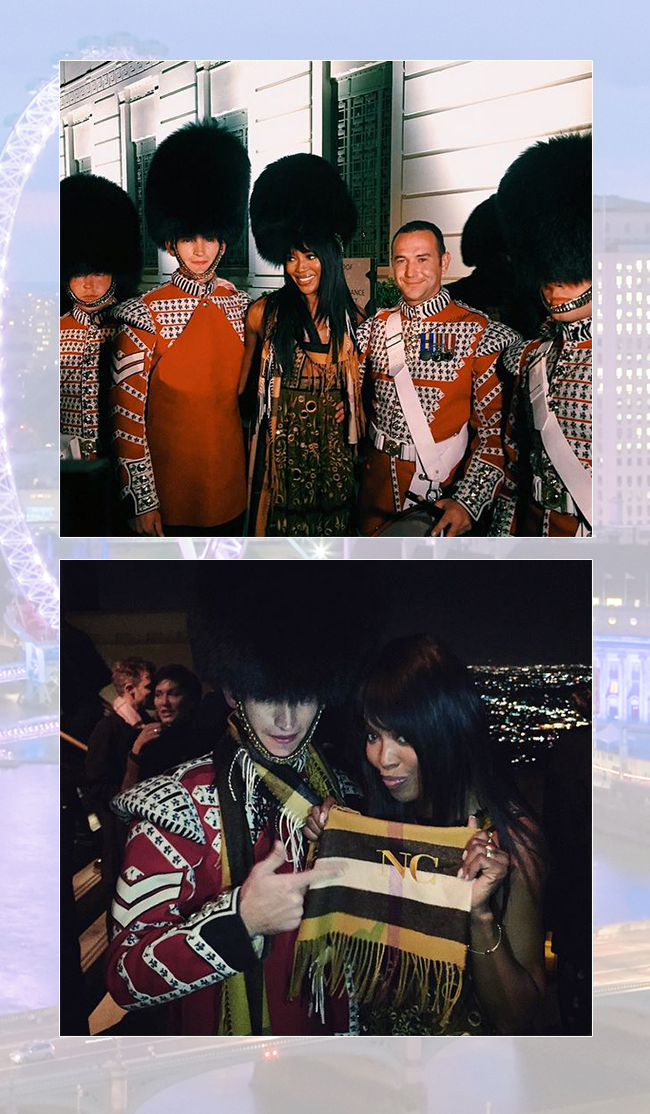 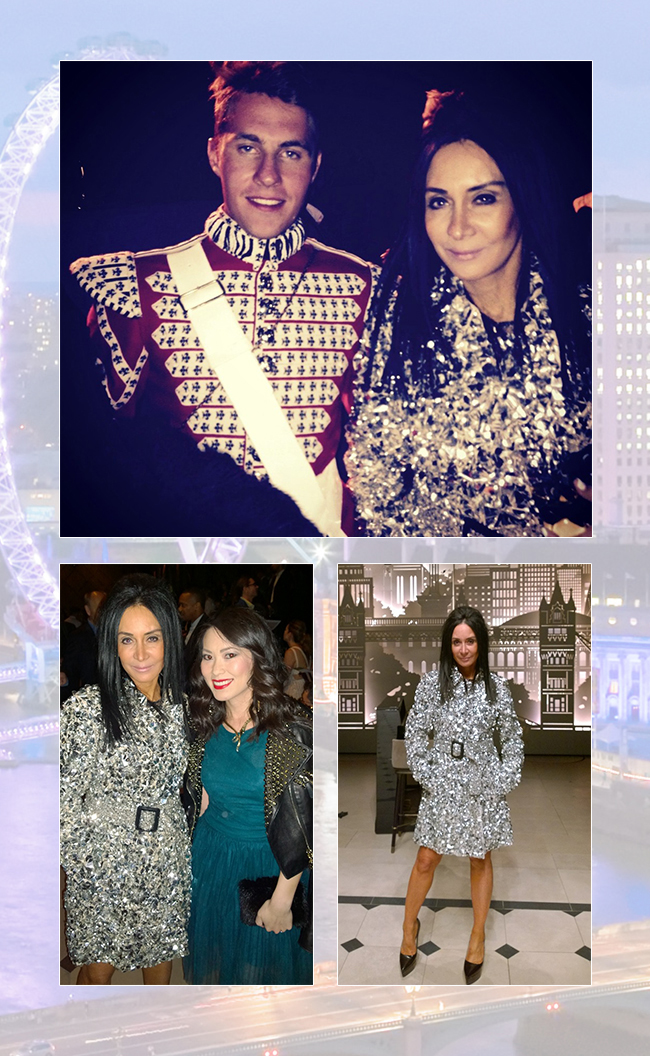 Thank you Burberry and to my dear friend Christine Chiu (above) for sharing the evening with me. London in Los Angeles will long be remembered. Please come across the pond more often.

With Love From The Griffith Observatory.