‹ Cinch Your Waist!
Fall Must Have: J Brand Outerwear ›

posted by NJ Goldston, The Brunette on September 24, 2012 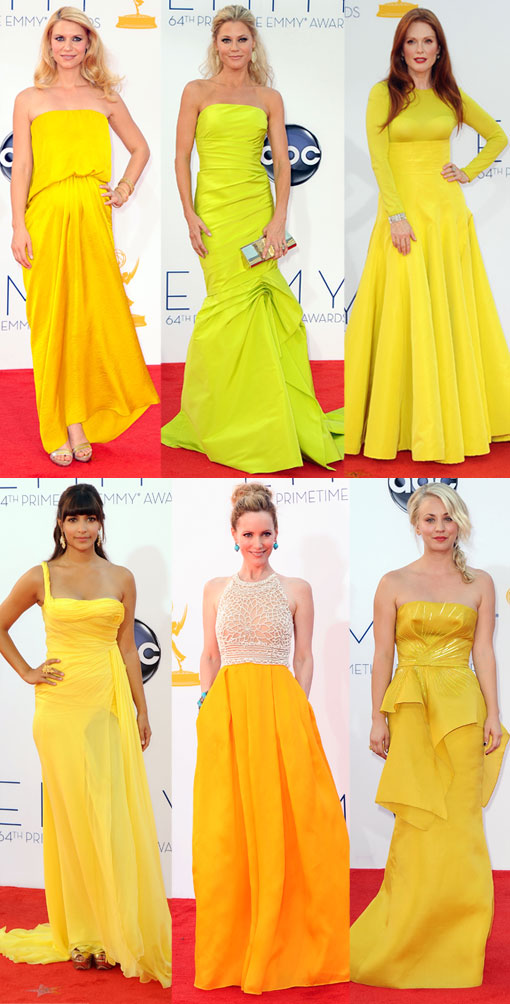 The Yellow and Lemon-Lime Trendsetters Included From Top Left: Claire Danes, Julianne Moore, with Julie Bowen as our favorite in this grouping, Hannah Simone, Leslie Mann and Kaley Cuoco.

In Shades of Red or Purple: Ginnifer Goodwin, Kat Dennings,Tina Fey and Julia-Louis Dreyfus and Kelly Osbourne Below 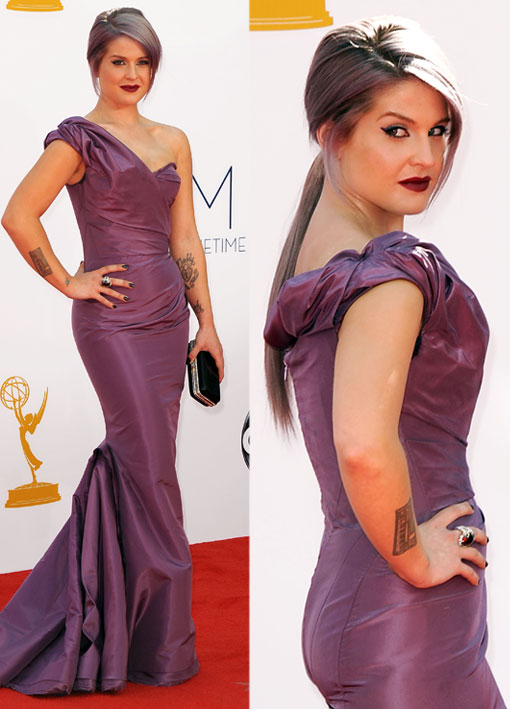 From the top: Best-dressed Sophia Vergara in a stunning teal gown with many of the other winning looks of the night in shades of blue on Nicole Kidman, Julianne Hough, Zooey Deschanel, Heidi Klum, Hayden Panettiere, Menounos, Edie Falco and Jane Levy. 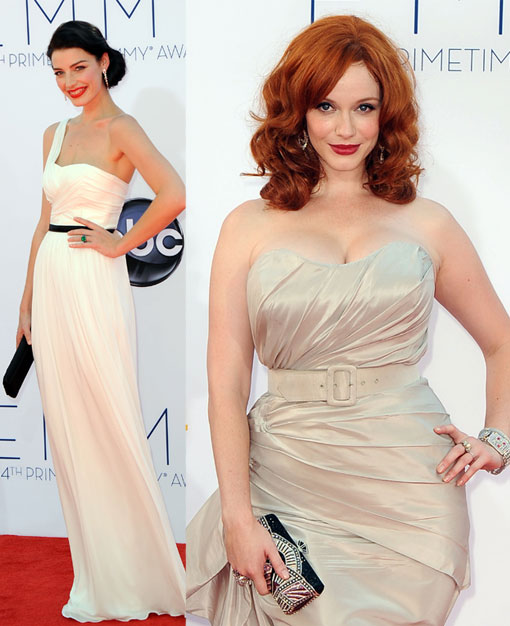 All photos by Patrick McMullan.

It was literally and figuratively a hot night. The 110º heat wave in Hollywood must have influenced the final choices for the Emmy Awards Red Carpet.  In general, the fashion parade was not as dazzling as prior years even a bit lackluster. The big trend: sexy is back. The emphasis was on strapless, low-cut gowns, anything with deep cleavage, plunging necklines, or exposed legs. Hair was simple up-dos. Dangling earrings with big, bold gemstones were the key jewelry statement with an occasional fabulous bracelet.

Key color trends, with almost all of the gowns channeling the sexy motif, included navy and every shade of blue (no surprise there).   Zooey Deschanel was in a fairy-tale princess gown from Reem Acra. It was a bit too cream puff for us with so much tulle but others loved it. Hayden Panettiere in Marchesa, Julianne Hough (rockin’ sexy & blue) in George Hobeika Couture and Nicole Kidman, who is forever elegant, in a turquoise beaded Antonio Berardi gown all looked stunning.  Heidi Klum channeled the other big trend of the night, the peek-a-boo leg, and we’d love your opinion on her look. She was at the top of  a lot of  some of the evening’s best dressed lists.

Lovely shades of  grey and silver, many covered in sequins, walked the carpet on Morena Baccarin, Emily Van Camp in J. Mendel (a top pick while others thought the color was too washed out on her), Lucy Lui in a metallic Versace (another top look), Kerry Washington in Vivienne Westwood ( an A) and Connie Britton in silver sequins. Christina Henricks was all curves and va-va-va voom in Christian Seriano. Once again, maybe just too much of a good thing.

It seems the heat may have had something to do with the bright yellow, sunny-hued gowns we saw on several celebs (blondes, brunettes and redheads alike).  They were a pretty surprise on Emmy-winners Claire Danes (who is also pregnant) in Lanvin, Julianne Moore in Dior, Julie Bowen (looking great) and Leslie Mann.  Giuliana Rancic and January Jones worked black beautifully with either architectural details, lace or transparency.  Glenn Close just had too much going on with her gown overpowering her. Loved Edie Falco in Stella McCartney and Amy Poehler looked great.

For the guys, Jimmy Fallon, Jon Hamm, Alec Baldwin  and Bryan Cranston all looked exceedingly dapper in their tuxes.

Bottom line, Sophie Vergara is our #1 pick in a shimmering open back (new trend) teal Zuhair Murad with 175 carat Neil Lane earrings. When you’re hot, you’re hot.  No one else came close.

There are 3 Comments to "Emmy Awards Red Carpet 2012: Sexy Is Back"