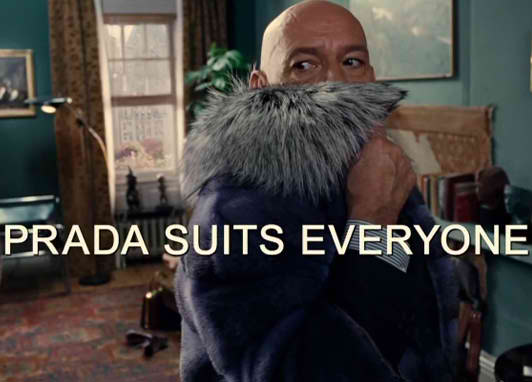 How did I miss this in May? My favorite label in the world showcased its first short film ‘A Therapy’ (and remember they did something similar for Miu Miu last summer) at the Cannes Film Festival in May. Directed by Roman Polanski, the short stars Ben Kingsley as a Central Park psychiatrist and Helena Bonham Carter as his client perfectly outfitted in red and purple Prada (the custom costumes were personally designed by Mrs. Prada and will not be commercially produced).

Not to give everything away, but Bonham Carter takes to the couch recalling a bad dream, at length, before reminiscing about her late father. “His money was a curse,” she says of her “Daddy” as she monotonously bemoans her crippling loneliness and staggering wealth. By this point, Kingsley, is singularly focused and captivated by his patient’s purple fur coat. He cannot take his eyes from it. Captivated, he slips away to touch it, smell it and the cross-dressing ensues as he eventually tries it on, posing sensually in the mirror of his study, while Bonham Carter endlessly babbles on about her bad fortune. The climax is the perfect tagline: ‘Prada Suits Everyone’.

Of course, I agree. See it for yourself on YouTube. ‘A Therapy’

NJ, The Brunette with a viral assist from Jadan and Ali