The Priciest Handbag In The World 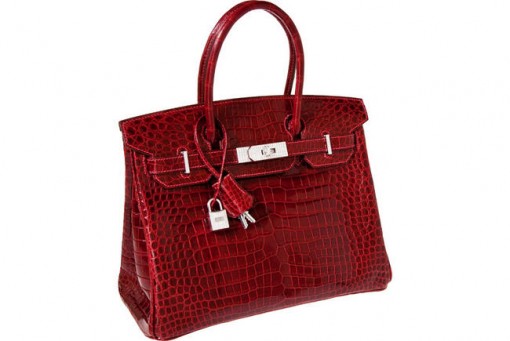 Just in case you missed this in the news yesterday, let’s all take a collective gasp.  Early this week someone very, very wealthy bought a handbag for over $200,000 at an auction in Dallas, breaking the world record for the highest amount of money ever bid on a purse. Of course, it was a Birkin from Hermes. Did you expect it t be anything else?

The buyer of the handbag chose to remain anonymous but the bag itself is known all over the world.  Women’s Wear Daily reported the record-breaking model was made from shiny deep red crocodile skin and accented with 18K white gold and diamond hardware, and sold for exactly $203,150.

Until April 2010, the bags were produced in such limited quantities that women who wanted them had to sign up for the wait list and some of them waited for as long as six years before they were invited to make an actual purchase (or made the cut). The bags come in four sizes, all of which are lined with goatskin, and prices can vary wildly depending on the materials used on the exterior.  If you didn’t know, the plainest of Birkin bags sell for between $8,000 to $10,000.

However,  the price of this bag  even surprised the auctioneers, saying “this was certainly an exceptional price, exceeding our highest expectations at every corner.” so, since we’re in the “I’m just saying” department, I’m just saying, “I’m going to keep me eyes peeled, I think there’s a strong livelihood we see this one on the streets of Beverly Hills maybe even on someone we know.”

There are 3 Comments to "The Priciest Handbag In The World"